To appease Professor Ratigan by helping him rule Mousedom.

Fidget is the secondary antagonist of Disney's 26th full-length animated feature film, The Great Mouse Detective. He is a bat who tends to do dirty work for his boss Professor Ratigan. He has a crippled wing and a peg leg, and as a result, he cannot fly properly.

He was voiced by the late Candy Candido in the original film, and by Frank Welker in the Read-Along Storybook and House of Mouse.

In the beginning, he kidnaps Hiram Flaversham in their toy shop, leaving his daughter Olivia Flaversham all by herself. Desperate to find him, she sets out to find Basil of Baker Street, the only detective with the skills to find him. When she informs Basil that it was Fidget who kidnapped her father and that he was a bat with a peg leg, Basil immediately deduces that Ratigan was behind the kidnapping (since Fidget is at his employ), and sets out with Olivia and Dr. David Q. Dawson to find them.

Ratigan charges Fidget with kidnapping Olivia as a means of blackmailing Flaversham with her life, as he is needed to help Ratigan overthrow the Queen of Mousedom on her Diamond Jubilee. Given a list, Fidget is also charged with stealing tools and uniforms for Ratigan's gang to use when they overthrow the queen, and steals them from a local toy shop. Basil tracks him there, so Fidget disguises himself as a baby in a crib using only a bundle until Olivia, out of curiosity, comes across the crib and finds Fidget. He captures her and manages to escape before Basil could stop him.

Though Ratigan is impressed that Fidget has managed to get all the items needed for his plot, he later discovers that the list was missing and that Basil was on the case. Knowing that Basil would use the list to track him down, Ratigan almost feeds Fidget to his cat Felicia, but decides to spare Fidget after realizing that he might use the opportunity to capture Basil. Under Ratigan's orders, Fidget tracks Basil and Dawson to a local pub and tricks them into following him to Ratigan's lair, where he dresses up like Olivia in a bottle to lure in the duo. Basil and Dawson are captured, and are left for dead while Ratigan and Fidget head off with their gang to Buckingham Palace to overthrow the queen.

At the palace, Ratigan's thugs quickly overpower real Royal Guards and Fidget delivers the fake robotic Queen built by Flaversham to the real Queen, who ends up taken captive to be fed to Felicia. Fidget attempts to carry out this task himself, but instead he is nearly eaten once again when Basil, who escaped Ratigan's trap, rescues the queen at the last second. However, as Felicia ends up being chased by Basil's pet dog Toby, Fidget is tied up with two more thugs while Basil tries to stops Ratigan, but escapes his bonds and once again kidnaps Olivia. Leaving the other thugs to be arrested, Fidget and Ratigan escape on a hot air blimp above the Thames River, taking Olivia as hostage.

During their getaway, the crooks are pursued by Basil, Dawson and Flaversham on a makeshift balloon, and Fidget who is pedaling the blimp's propeller tries to outrun them. Unfortunately, the extra weight is too much for him, and tells Ratigan that they have to lighten the load, implying that if they throw Olivia off the blimp, they could escape from Basil, Dawson and Flaversham. Ratigan agrees with him knowing his true intentions, but rather than throwing Olivia off, Ratigan throws Fidget out instead, believing that he has outlived his usefulness. Fidget, however, cannot fly because of his bad wing and falls screaming to his death into the Thames River below.

However, getting rid of Fidget proved to be Ratigan's fatal mistake, as he pedals his blimp, which ultimately crashes into Big Ben (since there's no one to steer), thus leading to Ratigan's final defeat.

During a comic in Disney Adventures Magazine, taking place after the movie, he has not only survived, but also reformed helping out Olivia. When Olivia heard about the Sideshow Sea Beast, she called him and Toby and head out for the carnival. He told Olivia that the beast is the talk of the show and that he used to work at a carnival. Fidget even showed Olivia how some of the tricks are done. Once he showed her the attraction, the monster got angry and held Fidget captive. Olivia saved his skin by carrying a chum bucket of fish guts, which is the beast's dinner. After the beast threw Fidget, Olivia hoped Fidget remembered that he can fly (how he got to fly again was unknown). Once the beast went back to the ocean, Olivia and Fidget celebrated with caramel apples. He probably reformed because with his boss Ratigan gone, he was pretty much lost and had no where else to go. Another suggestion is that he had enough with crime. It is also known that they solve other mysteries, but what they are is unknown.

At first, Fidget is a timid, deceptive, pusillanimous, cowardly, and greedy minion in the employ of Professor Ratigan. He is somewhat forgetful and inattentive when he left his hat and Ratigan's list (which allows Basil to track him down and find Ratigan's hideout, respectively) when he ran away the first and second time, respectively. Despite this, he is also cunning, impatient, and duplicitous, as he tends to use stealth to carry out the tasks given to him by Ratigan. He is not a very good speaker, as he has difficulty with speaking properly about what happened to Ratigan's list. In the comics, he is shown to be more friendly and enthusiastic after deciding to do good as he is the companion of Olivia whenever she investigates. 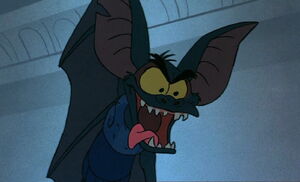 Fidget hanging from the ceiling. 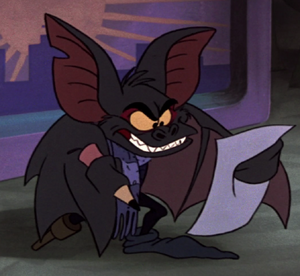 Fidget with a pencil and a list on a piece of paper. 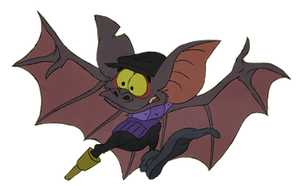 Retrieved from "https://villains.fandom.com/wiki/Fidget?oldid=2532183"
Community content is available under CC-BY-SA unless otherwise noted.