Help Elliot and his friends to save Boog from the circus (Open Season 3; succeeded).

Fifi is the main antagonist of Open Season 2 and one of the supporting protagonists of the franchise. He is the pets' former leader and boss and one of Mr. Weenie's current best friends.

He was voiced by Crispin Glover, who also played Stan Bittleman in Like Mike, Thin Man in the Charlie's Angels film series, Willy Wonka in Epic Movie, and Grendel in Beowulf.

Fifi explains why he has a severe dislike for wild animals: One night at his home, his owner threw a squeaky toy behind the bushes and as he went to retrieve it, there were wild animals inside and they scared Fifi (making him drop his toy, which he had in his mouth); then he kept backing up, until his tail touched a bug lighter behind him and shocked him, which is how his tail had a little bald spot on it. He tells the other pets that the bald spot was caused by wild animals.

For a long time, Fifi has had a severe hatred of wild animals. He was playing with his pet toy on night, when he was spooked by several wild animals and eventually electrocuted by a bug zapper, leaving a bald spot on his tail. He claimed this was a wild animal attack and has hated them ever since.

Mr. Weenie didn't believe Fifi's claims due to his friendship with the wilds. Fifi told the pets that Mr. Weenie had become feral, and had to be cured. He ran away from them when Buddy the porcupine came to his rescue, leading Fifi to get electrocuted again, resulting to a bald spot on his head.

Elliot, Giselle, and McSquizzy (who all went to Pet Paradiso to save Mr. Weenie undercover) were later captured by Fifi, who planned to kill them with electric collars. However, they were rescued by Boog. Fifi and Elliot wrestled trying to get their hands on the remote control which activated the collars. Fifi finally got his hands on it, and presses the button despite warnings from the other characters, only to find the collars all over his body. This resulted to him losing all his fur. After this, the wilds and the pets became friends.

Fifi is now completely redeemed due to being neutered sometime after the previous movie. Instead, he is seen as a Zen dog and usually meditating.

One night, in Bob and Bobbie's RV, after the couple go out to look for and capture Bigfoot, Fifi is seen watching TV and repeatedly hitting it so it can work. He then sits down and meditates. When the pets watch TV and see a commercial for the Maslova Family Circus, they mistake Doug for Boog and decide to go to the circus to save Boog from the performers, whom they think are trying to murder him. 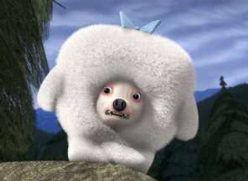 Fifi telling his story to the domestics in Open Season 2 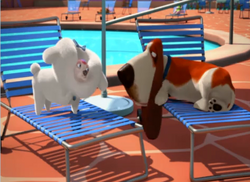 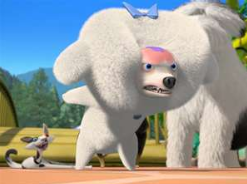 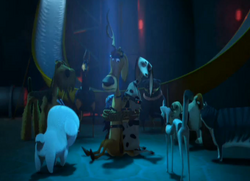 Fifi and the domestics capturing Elliot, Giselle (who is undercover as a dalmatian), McSquizzy (who is disguised as a chihuahua) in their lair in Open Season 2

Fifi and the domestics watching TV and are shocked, upon seeing Boog (really Doug) almost getting "killed" by the circus performers in Open Season 3

Fifi telling Mr. Weenie where to steer in Bob and Bobbie's RV in Open Season 3

Plush toy of Fifi.
Add a photo to this gallery

Retrieved from "https://villains.fandom.com/wiki/Fifi_(Open_Season)?oldid=3126568"
Community content is available under CC-BY-SA unless otherwise noted.