Proficiency with the dark side

Track down and execute all remaining Jedi who survived Order 66.

Locate and abduct any known Force-sensitives.

The Fifth Brother is one of the two secondary antagonists (alongside the Seventh Sister) of Season 2 of Star Wars Rebels and will return in some capacity in the upcoming 2022 Disney+ miniseries Obi-Wan Kenobi.

He was originally a Jedi Knight, but later fell to the dark side of the Force following the collapse of the Galactic Republic and was trained in the ways of the dark side by Darth Vader. He later became an Inquisitor and acted as an enforcer for the Galactic Empire, traveling across the galaxy in search of Force-sensitives and surviving Jedi, which he was tasked with executing.

In Star Wars Rebels, he was voiced by Philip Anthony-Rodriguez, who also voiced Maurice Chavez in Grand Theft Auto: Vice City and Mano in Justice League vs. the Fatal Five. In Obi-Wan Kenobi, he will be portrayed by Sung Kang.

The Fifth Brother himself was originally a Knight of the Jedi Order in the years prior to the Empire. He served in the order and was around to see the Clone Wars and witness the end of the Old Republic and the destruction of the Jedi as a whole. During this time, he had fell to the dark side and was later inducted into the Imperial ranks after the formation of the Galactic Empire. The Fifth Brother soon became a proficient dark side user and became an Inquisitor of the Inquisitorius and was tasked with executing all remaining Jedi that survived Order 66. During his time in training at the hands of Darth Vader, the Fifth Brother would be sent to the Jedi Temple along with other Inquisitors to study the Jedi records as a means of finding ways to defeat the enemies of the Empire.

Unlike The Grand Inquisitor or the Second Sister, little is known of Fifth Brother's past before induction into the Imperial Inquisition. All that's clear is that he was among the first recruits who Darth Vader began training when Palpatine tasked his apprentice with honing his Force-sensitive weapons. Vader was a cruel teacher, however, and Fifth Brother lost his right hand in the course of learning his lessons. Often clashing with his fellow members, Fifth Brother's approach to hunting Jedi was often more brash and direct.

After The Grand Inquisitor died over Mustafar and learning of his former apprentice, Darth Vader sent the Fifth Brother to capture Ahsoka Tano and the other rebels. The Fifth Brother would later fight Kanan Jarrus in one episode. When arriving at a Star Destroyer, an Imperial officer was timorous of his arrival. The Fifth Brother told the officer that he will succeed in the mission.

Skirmish Aboard the Medical Station

Later, he was present with both Kallus and Konstantine on the bridge of the Relentless when a power surge at an abandoned Republic Medical Station was detected. Though Kallus dismissed it, the Fifth Brother quickly took command and immediately set out for the medical station, unaware that the Seventh Sister was already there and hunting the rebels. When Ezra and Sabine Wren were fleeing this Inquisitor, they were met by a grinning Fifth Brother who ignited his lightsaber threateningly.

When he was on the trail of Ezra Bridger, Seventh Sister once stopped his blade from striking the young Jedi. Ezra was captured helping Sabine to escape, with the Fifth Brother reaching him just as the latter fled. He attempted to murder the young Jedi with his lightsaber, only for the Sister to deflect it with her own blade. When the Fifth Brother protested, citing Ezra as his kill, the Sister derided him for shortsightedness and pointed out that the boy could be used to trap his friends.

While the Seventh Sister interrogated Ezra, the Fifth Brother went to hunt down Sabine accompanied by two of the Sister's ID9 Seeker Droids. Hunting her through the corridors, he sensed the presence of Sabine and Garazeb Orrelios who had prepared an ambush consisting of several thermal detonators planted in the corridor. Unfortunately, the Fifth Brother used the Force to lift the detonators and throw them at the rebels, knocking out Sabine in the process. Hefting the unconscious Mandalorian over his shoulder, the Brother told the two seeker droids to do as they wished with Zeb; both droids were subsequently destroyed when the Lasat crushed them against boxes of medical supplies.

The Brother returned to find that Ezra had delivered very little information, but at that moment they received a transmission from "Commander Meiloorun" asking if they needed help; the Brother forced Ezra to accept as he threatened Sabine at lightsaber point and then proceeded to Bay Six where the rebels were to arrive. When they got there, they were ambushed by Zeb in the Phantom; in the chaos, Ezra managed to recover his lightsaber and both boarded the shuttle. Both Inquisitors attempted to hold it in place with the Force, but the Brother was forced to break off to deflect blaster fire and the Sister was nearly dragged out into space when the shuttle burst free, leaving both Inquisitors fuming.

Later, the Fifth Brother and Seventh Sister boarded a passenger ship above Chandel to seize a Force-sensitive infant named Alora. Despite the best efforts of the grandmother Darja to stop, the two Inquisitors managed to corner them and take Alora into custody. Prior to leaving the ship, the Brother killed all of the other passengers by throwing his double-bladed lightsaber at them. The Inquisitors' actions attracted the attention of the Ghost Crew and Ahsoka. While Ahsoka traveled to Chandel, Ezra, Kanan, Zeb, and C1-10P traveled to Takobo aboard the Phantom to investigate.

Taking Alora with them, the Fifth Brother and Seventh Sister traveled to Takobo to collect a Force-sensitive Ithorian infant named Pypey. After parking their TIE Advanced v1s at a spaceport hangar bay in Hammertown, the two Inquisitors left a seeker droid to guard their ship and the baby. Together, they then visited Pypey's home and confronted her mother Oora. However, Oora had already sent her child away with the droid. Before leaving the house, the two Inquisitors accosted her and smashed the furniture in her home.

While prowling the streets of Takobo, the two Inquisitors managed to intercept the droid. However, Pypey had already been picked up by Zeb, one of the rebels they had encountered earlier on the derelict medical station. The Fifth Brother and Seventh Sister then pursued Zeb to a nearby apartment building. While the Brother used Pypey's fear to track the Jedi, the Sister sent one of her seeker droids to keep an eye outside. Shortly later, Ezra and his master Kanan entered the building to aid Zeb.

Ezra's presence caused Pypey to cry since he could sense the boy's fear. Closing in on the rebels, the Fifth Brother and Seventh Sister attempted to spike them out with their lightsabers. Ezra managed to temporarily mislead the Inquisitors by using a comlink to make a recording of Pypey's cries. The Fifth Brother fell for that ruse and was warned by the Seventh Sister to stop wasting their time. In the meantime, the rebels managed to escape the room and made a run for the stairs. To confuse the Inquisitors, the rebels split up; with Ezra and Pypey heading into the ventilation shafts while Kanan and Zeb held off the Inquisitors.

Resuming their pursuit, the Fifth Brother sensed Ezra and Pypey's presence in the ventilation shaft above. He then used his lightsaber to spike holes in the ceilings in an attempt to flush out their quarry. Before the two Inquisitors could corner their prey, they were confronted by Kanan and Zeb. The lanky Zeb took on the Brother but was unable to match the Inquisitor's Force powers. Forced to retreat, Kanan and Zeb jumped out of the window and fled on a speeder. In response, the Inquisitors commandeered another speeder and continued the pursuit. Following another skirmish, the Inquisitors cornered their rebel foes outside the spaceport.

The two Inquisitors quickly overpowered the three rebels. Before they could finish off their work, the spaceport doors opened to reveal Ahsoka. While the other rebels retreated aboard the Phantom with Pypey, Ahsoka engaged the two Inquisitors in a lightsaber duel. Armed with two lightsabers, she engaged both Inquisitors for a few moments before effortlessly side-swiping the Fifth Brother's clumsy attack and throwing him against a pillar, knocking him out. The Seventh Sister lasted longer, but was soon defeated as well. Before Ahsoka could finish the Sister, Imperial reinforcements arrived in the form of Stormtroopers and a few Imperial Troop Transports. Though the Brother threw his lightsaber at her to try and prevent her escape, Ahsoka managed to dodge it and escaped with her rebel comrades and the babies aboard the Phantom. To add insult to injury, the Fifth Brother and Seventh Sister discovered that the rebels had also destroyed their TIE Advanced v1s and taken Alora. However, the Inquisitors were delighted to learn from one of the Sister's seeker droids that the rebels were hiding on the planet Garel.

The Fifth Brother was ordered by Darth Vader to travel to Malachor with Seventh Sister and obtain a Sith holocron from within a Sith temple located beneath the planet's surface. She and her accomplice came to the aid of the Eighth Brother after he was captured by Kanan and Ahsoka; all three Inquisitors were forced to retreat when their opponents were joined by Ezra and his new companion, the former Sith Lord Maul. Having escaped her adversaries, the Seventh Sister dispatched some of her ID-9 Seeker Droids to spy on them.

Upon attacking Ahsoka and Kanan with the aid of the Eighth Brother, Maul appeared to assist the Jedi. Ahsoka managed to strike Fifth Brother's lightsaber hilt, damaging the weapon and causing him to drop it. The Fifth Brother was then killed by Maul, who slew him easily. 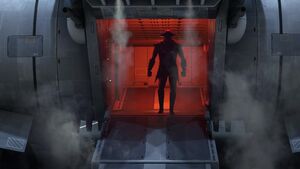 The Fifth Brother arrived at the Star Destroyer 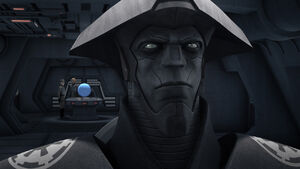 The Fifth Brother on the bridge. 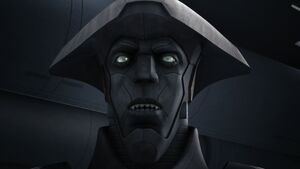 The Fifth Brother sensed that he was looking for him at the old medical station. 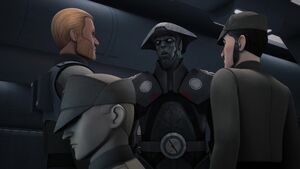 The Fifth Brother does not need the help of Agent Kallus. 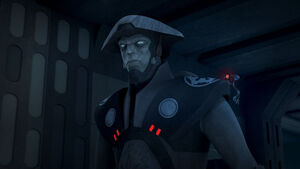 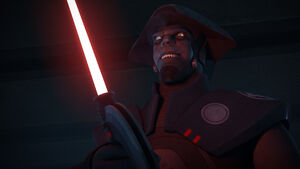 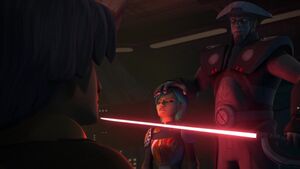 The Fifth Brother threatening to kill Sabine with his lightsaber. 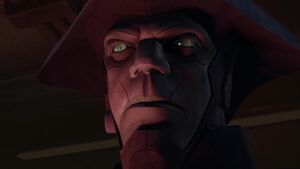 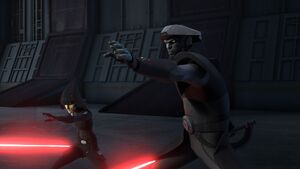 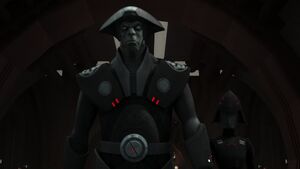 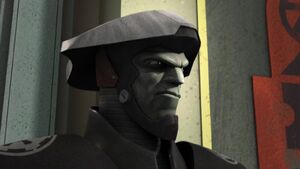 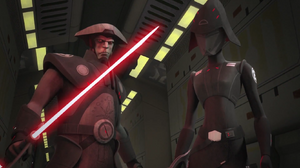 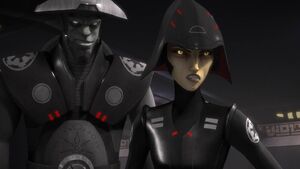 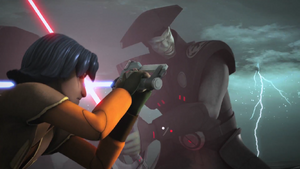 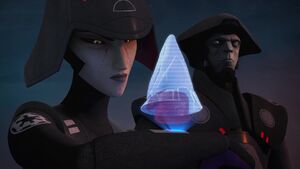 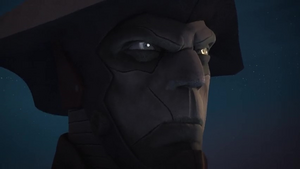 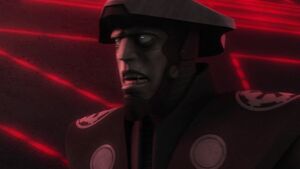 The Fifth Brother before being killed by Maul. 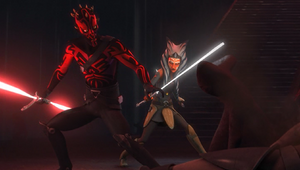 Fifth Brother died at the hand of Maul.