Fiona Thyme is an anti-hero from the American animated webseries RWBY. She is a sheep Faunus, Huntress, and member of the Happy Huntresses under Robyn Hill, who use vigilantism to protect and provide for Mantle.

She is voiced by Michele Feghali Sontag.

Fiona became a Huntress after graduating from Atlas Academy, and went on to become a member the Happy Huntresses (whether they were a team in training or not is unknown).

Fiona is first seen with Joanna watching Amity Colosseum arrive at an abandoned Schnee dust mine before reporting to Robyn.

Robyn and Fiona stop a shipment of Mantlean supplies that was being rerouted to Atlas, with Robyn demanding to know what Ironwood is working on, but Clover Ebi informs her that the information is confidential. It would have turned into an ambush were it not for Penny's interference. Robyn retracts her team, but promises that they will find out about the shipments.

On the day of the council election, Jacques and Robyn are very close in the polls, but most expect Robyn to win. Robyn and her Huntresses attend a victory celebration, where Fiona gives a speech supporting her leader. However, the rally is sabotaged by Tyrian and Watts, who murder several of Robyn's supporters, injure Fiona, and frame Penny for the massacre. However, Fiona recovered soon after.

Following Jacques' victory and the assumption that Ironwood had Penny kill her supporters, the Huntresses ambushed truckloads of Dust and stole it for the benefit of Mantle. Fiona used her Semblance that allowed her to compress items down to take whole trucks of materials an make them fit in her hand so she could steal them.

Later, she and the rest of the Huntresses went into a temporary alliance with Ironwood as they worked to stop a Grimm invasion on Mantle that was caused by Watts. However, Ironwood retracted his support and eventually arrested Robyn, leaving them to defend Mantle themselves. They eventually managed to succeed in defending the people thanks in part to Ruby's plans.

Fiona is serious and stern towards her opponents, usually not showing much emotion. However, when in the company of friends and allies, she lights up into a jovial and affable personality. When committing her acts of vigilantism, she goes back to being serious, and does not oppose the orders given to her by Robyn, even if they are criminal.

Fiona appears as a unit in RWBY: Amity Arena. She is a ranged unit that can summon a truck with a gun out of a "pocket dimension" to aid her in battle. Once the truck is destroyed, it drops a stationary gun that acts as a building unit. 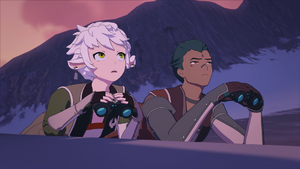 Fiona on a scouting mission. 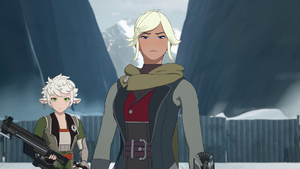 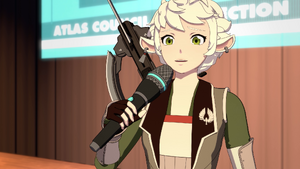 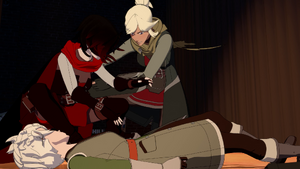 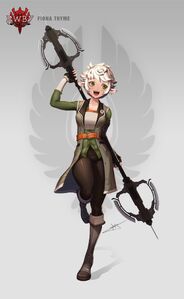 Fiona as she appears in RWBY: Amity Arena.