Fiona Volpe is the secondary antagonist in the 1965 James Bond film Thunderball.

She was portrayed by Luciana Paluzzi.

A deadly assassin in SPECTRE's execution branch, she becomes NATO pilot Major Francois Derval's mistress in order to steal a Vulcan bomber and its precious cargo of two atomic bombs, which SPECTRE plans to use for a blackmail operation.

She organizes Derval's murder and kills co-conspirator Count Lippe by destroying his car with the missile launcher on her BSA Motorcycle after his selection of the greedy Angelo Palazzi almost jeopardizes the operation. Volpe is later seen pushing the motorcycle into a pond, presumably to hide evidence.

Later, in the Bahamas, Bond meets Volpe while hitchhiking and she startles Bond with her fast driving. It is here that 007 first notices her distinctive SPECTRE insignia ring. They arrive at their hotel in Nassau. Fiona holds Paula Caplan captive, but Caplan commits suicide by taking cyanide before revealing anything. Returning to his suite, Bond discovers Fiona in his bathtub. She gets out and the two make love. Grasping the headboard, she exclaims "Mmm... this bed feels like a cage, all these bars. Do you think I'll be safe?".

While leaving for the Junkanoo, Bond opens the door to come face-to-face with SPECTRE thugs Vargas and Janni. Slamming the door shut, he turns to find Volpe holding a gun on him. She lets them in and, after belittling Bond about his ego, takes him captive.

As they sit in traffic, Bond improvises a distraction by knocking an intoxicated reveler's liquor over the car's interior and igniting it with Volpe's cigarette lighter. He flees the burning vehicle into the Junkanoo crowds, pursued by Volpe and her men. One of Fiona's minion shoots him in the ankle, and he inadvertently leaves a blood trail which leads them to the Kiss Kiss Club, where 007 attempts to mix in with the dancers.

Volpe approaches Bond as he is dancing with another woman. Assuming Volpe is his wife, the woman leaves, and the pair begin dancing slowly. Fiona tells Bond that he has nowhere to run, to accept his fate and save both the trouble of chasing one another, but Bond tells Fiona his fascination towards her. As they dance, another henchmen takes aim at Bond from behind a nearby curtain. Bond notices it in time and spins Volpe into the path of the bullet, which pierces her spine and kills her instantly. Bond drops Volpe's corpse into a nearby chair, quipping to the couple sitting at the table, "Mind if my friend sits this one out? She's just dead.". 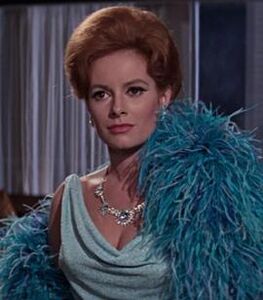 Volpe's death. (Bond: Mind if my friend sits this one out? She's just dead.) 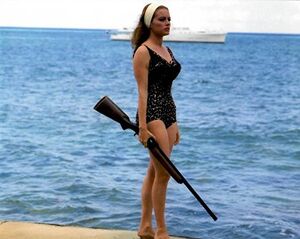