Fire Lion is (hence the name) a lion coated in flames and is a mini-boss that has thus far appeared in three games in the Kirby series, Kirby's Adventure and its remake, Kirby: Nightmare in Dream Land, and later in Kirby Super Star Ultra.

Fire Lion attacks by charging at Kirby in a stream of fire, and also by grabbing Kirby and scratching him, or trying to pounce on him. When Fire Lion pounces, a star will appear, allowing Kirby to inhale and spit it back at Fire Lion, inflicting damage.

Fire Lion was extremely dangerous and aggressive in terms of attacking in Kirby's Adventure but has died down in its aggression over the years. In its original appearance, it looked very nonthreatening and kitty-like, but later appearances drop the cute look in favor of a demonic appearance with a flaming yellow and red mane, and flaming eyes with no pupils. 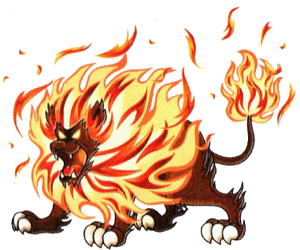