Creating green mucus from its back
Borrowing
Squeezing through tight spaces

Invading the homes of oher dragons.

Deadly Predator
The Firecomb Crasher is a minor antagonist in Dreamworks' Netflix original series Dragons: Race to the Edge. It serves as the main antagonist of the episode Crash Course, and a minor protagonist in the episode Family Matters.

The Firecomb Crasher is a Cavern Crasher dragon. He appeared to have black and yellow pattern. He has a hooked nose and razor sharped teeth. His back is covered with thick bumps that produce a green mucus. His tail is flat and rounded.

When Firecomb Crasher invades the nest of the Fireworm Queen who befriended Snotlout, she goes to the Dragon Riders for help.The gang follow her to her nest, but are suprised to find no sign of the Dragon Hunters. They soon come across Firecomb Crasher who is attempting to get to the Fireworm eggs. Fishlegs identifies him as a Cavern Crasher using his dragon cards. Snotlout and Hookfang are quick to go in for the attack, to which Firecomb retaliates. Unable to defeat Hookfang, Firecomb attacks Stormfly, but is driven away by her fire. Firecomb climbs up the cave wall, then goes after Fishlegs. Hiccup notices, and has Toothless fire plasma at him. Firecomb retreats, leaving a trail of mucus that Hookfang fires at. The highly flammable mucus sets ablaze, allowing Firecomb to succesfully escape.

Hookfang and Snotlout follow the queen to her eggs, despite the others advising him not to. A rock slide caused by Firecomb blocks the direction Snotlout went in, forcing the rest of the Dragon Riders to find another way to him, however, they run into Firecomb first. Hiccup and the others attack Firecomb with their bolas. This angers Firecomb, who shoots his mucus at them. Firecomb attempts to burn the slime-covered vikings. The Riders hastily doge the Cavern Crasher's fire. Firecomb corners Fishlegs against a boulder, but before he can attack him, he takes off after the eggs. The riders follow him. Toothless shoots a plasma blast, and boulders block Firecomb's path. This isn't an issue for him though, as he easily slips through.

While Snotlout, Hookfang, and the queen evacuate the hatchlings, they hear Firecomb approaching them. Knowing that they can't get all the hatchlings out on time, Snotlout tries to quiet them, but to no avail. Left with no other options, the three prepare for battle. Firecomb arrives at the nest. Queen attempts to shoot fire at him, but Firecomb is unaffected. Hookfang covers hm with rocks, but that also doesn't work, as he simply squeezes out. Firecomb shoots acid, followed by fire at the queen knocking her down. Snotlout and Hookfnag rush to defend the hatchlings. Firecomb takes chase, knocking over one of the combs in the process. Hookfang jumps on top of the queen, combinig their fire.  The hatchlings and Snotlout hide under the knocked over firecomb. Hookfang and the queen form a huge explosion of fire that spread across the entire nest. The outraged Firecomb sets his sights on Snotlout, and attempts to shoot mucus at him. However, nothing happens, as all the mucus was burned away during the explosion. However, firecomb doesn't quit. As he tries to get to the baby Fireworms, Hookfang and the queen hold him off with their fire. Hiccup and the others arrive on the scene, joining Hookfang and the queen. All the dragon fire overwhelms Firecomb, who retreats, finally leaving the nest to its queen. 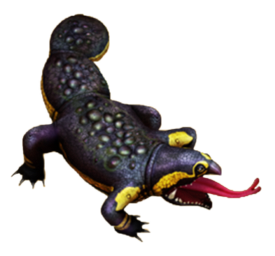 A Firecomb Crasher in Rise of Berk.

Firecomb Crasher closing in on Fishlegs.

Retrieved from "https://villains.fandom.com/wiki/Firecomb_Crasher?oldid=4054023"
Community content is available under CC-BY-SA unless otherwise noted.