Get the Headmaster killed (succeeded, albeit indirectly)

Murder (in erased timeline, by killing Headmaster and numerous other people, including Cable's family)

Russell Collins, later dubbed as Firefist, is the second main antagonist of the 2018 X-Men film Deadpool 2.

He is a mutant kid with the ability to control fire who is targeted by Cable due to killing his family in the future.

Russell is a boy with problems of being aggressive due to the torture he suffered for the director of the orphanage of mutants. Because of this, he does not tend to have much control over his powers and his anger is only a desire for revenge towards those who hurt him.

Russell started out as one of the orphaned mutant children who was sent to an orphanage, where he and the other kids were abused and mistreated by its Headmaster. Eventually, Firefist snapped out and brutally killed the Headmaster, developing his own pride of killing people for pleasure. This event led him to become an assassin criminal for hire, and among the people he killed were Cable's wife and daughter, which led an angry Cable to go back in time to kill Firefist before he becomes a killer.

In the present, Deadpool, Colossus and Nega Sonic Teenage Warhead attempted to pacify a standoff between Firefist and several authorities at the orphanage, but not before Deadpool learns that Firefist was abused by the Headmaster and his staff. This resulted in the death of one of the staff members, and for Deadpool and Firefist to be arrested and taken to the "Icebox" (an isolated prison for mutant criminals). However, the arrival of Cable allowed Firefist to escape, but not before he overhears Deadpool denying to Cable that he cares for the young mutant.

After freeing Juggernaut, Firefist formed a plot with him to kill the Headmaster. However, Cable decides to give Deadpool a chance in talking Firefist out of his plan so that the bad future will be averted. As Colossus distracts Juggernaut, Deadpool tries to reason with Firefist, but the latter refuses due to his hatred towards the Headmaster. This prompted an angry Cable to shoot down Firefist, but Deadpool sacrifices himself by taking the bullet. Upon witnessing this and realizing what the folly of revenge could do, Firefist finally agrees to become a better person. Cable would later use his last charge on his time-traveling device to save Deadpool's life by strapping a token into Deadpool's heart before they arrived at the orphanage, just as the Headmaster is run over by Wilson's taxi-driver friend Dopinder. Anyway, Russell still has his change of heart and lets his evil personality to go away, thus erasing not only his murderous future but the deaths of Cable's family from the timeline, much to Cable's relief. 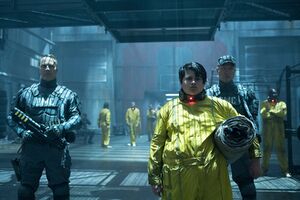 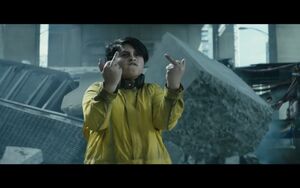 ITSA
Retrieved from "https://villains.fandom.com/wiki/Firefist_(X-Men_Movies)?oldid=3456535"
Community content is available under CC-BY-SA unless otherwise noted.