Working as a mercenary for money.

Mercenary
Garfield Lynns, also known as Firefly, is a villain in the TV series The Batman.

He is voiced by Jason Marsden.

A corporate saboteur, Firefly executed a few take-downs of rivals to GothCorp. Paid by the job, Firefly did each one with ease until Batman intervened. Though Firefly proved to be a challenge for Batman at first, he was taken down when Batman mimicked his opponent's high-speed jet pack, allowing him to play "catch up" and took down the criminal.

Mr. Freeze soon hires Firefly to help him put his new plan to action: putting Gotham City in a never-ending winter but the two were stopped by Batman.

He then joins Team Penguin lead by Penguin alongside Killler Croc Killer moth and Ragdoll which was formed to finally eliminate Batman. In the end, Firefly was defeated alongside the team and captured.

He was then captured by Rumor, wanting to be eliminated alongside Gotham City's other criminals and super villains. After being freed, Batman and Robin defeated Firefly and the other freed prisoners then they all got arrested.

Firefly soon gains a new partner and lover, Blaze, and the two steal a phosphorus isotope to upgrade his battle suit. An accident causes the stolen item to mutate Firefly into Phosphorus which has him acquire greater powers and abilities but is also driven insane. He infiltrates the Chemical Plant and plans to destroy Gotham City; but is foiled and ultimately defeated by Batman, then sent to Arkham Asylum.

Firefly's weapons and paraphernalia include a heat ray, a battle suit and a jet pack. In the sky, he is a dangerous foe but on the ground, his not much of a threat, as his hand-to-hand combat skills were useless against Batman. That said, his mental instablity and above average physical strength still make him a city-level threat at worse. 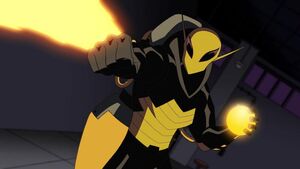 Firefly as Phosphorus
Add a photo to this gallery 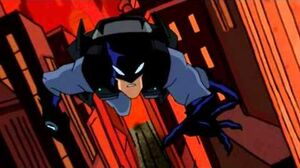 Batman VS Firefly (HD)
Add a photo to this gallery

Retrieved from "https://villains.fandom.com/wiki/Firefly_(The_Batman)?oldid=3883121"
Community content is available under CC-BY-SA unless otherwise noted.