Firelord is a anti-villain from the Marvel comics, He is one of Galactus' Heralds and manifests its Cosmic Power via control of Fire.

Pyreus Kril, an officer of the Xandarian Nova Corps, saw his commander abducted by Galactus, devourer of worlds, from aboard his ship Way-Opener. Kril's commander became Air-Walker, Galactus' Herald, seeking out worlds for him to destroy. The loyal Kril followed his trail, eventually becoming Galactus' newest Herald, following Air-Walker's death. Remade as Firelord, Kril wielded the energies of a miniature sun. Firelord served with Galactus briefly, until Thor offered the Asgardian construct known as the Destroyer to Galactus as a replacement Herald.

Firelord returns to deep space. He returns months later with the Sh'ar agent , Erik the Red who tricks Firelord into battling the X-Men.

Several years later Firelord discovers that Thor has battled a robotic replica of the Air Walker, and after revealing the origin of the two Heralds to Thor returns to space with the remains of the android. Firelord later encounters Spider-Man in a fight - albeit one provoked by humans who drove Firelord into a temper because they believed that he was a mutant - but he was defeated by the wall-crawler due to Spider-Man's hit-and-run approach serving as an effective counter to Firelord's brute raw power.[ Firelord also meets the superhero team the Avengers, and assists them against the space-pirate Nebula.[9] Firelord has since aided his fellow Herald Silver Surferon a number of occasions, particularly against the threat of Morg Galactus' most brutal Herald. Firelord assisted Thor in his battle against Thanos and his thrall Mangog. Firelord and Air-Walker also helped Nova and the New Warriors fight the Xandarian villain Supernova.

Firelord battles the Annigilation Wave of Annihilus alongside his fellow Heralds, including Redshift and Stardust . Although wounded at one point, Firelord recovers and now seeks vengeance against the remnants of the forces of as they destroyed his home-world of Xandar.

Like all heralds of Galactus, Firelord has been imbued with the Power Cosmic and possesses a number of superhuman attributes.

Firelord oversaw the construction of a device at a volcano that would help Galactus comsume the Earth. He ended up fighting a group of heroes made up of Black Panther, Invisible Woman, Winter Soldier, Ant-Man and Hulk. Firelord was weakened when Invisible Woman cut off his oxygen with her forcefield and was then put out by Hulk's thunderclap and his tower was destroyed by Winter Soldier with a bazooka. 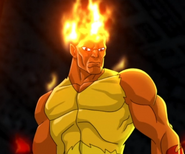 Firelord in Hulk and the Agents of S.M.A.S.H.
Add a photo to this gallery

Retrieved from "https://villains.fandom.com/wiki/Firelord?oldid=4266139"
Community content is available under CC-BY-SA unless otherwise noted.