Burn the forest down.

The Firepede is an antagonist from the 2012 racing video game LittleBigPlanet Karting, serving as the boss for the level "On the Wormpath". It is a a massive, flaming centipede awoken by The Hoard's negative influence that begins burning down the forest of Eve's Asylum.

As the Hoard steal and destroy across Eve's Asylum, they bring more negativity and "bad vibes" to the world. Venus the Flytrap has a vision of the terror they will bring, but her short-term memory makes her forget what the terror was. As Sackboy fights the Hoard off, Venus continues to warn him that something terrible is coming.

After the Hoard have stolen everything of value and left to the next world, leaving Eve's Asylum in ruins, Venus fears that the negativity has awoken something nasty. Suddenly the Firepede emerges, and begins using its fire powers and flaming body to begin burning the forest to the ground. With the help of Firebugs and Caterpillars, Sackboy goes to face the foe.

Sackboy uses his weapons to shoot glowing red weak points on the Firepede's body. This enrages the Firepede and alerts him to Sackboy's presence, causing him to fight back by dropping fireballs and flaming debris in Sackboy's path. Occasionally, he will take alternate routes to sneak behind Sackboy and charge him with his pincers and fire. Eventually, Sackboy shoots the main weak point enough to make the Firepede lose a section of its body and speed up. Sackboy must repeat the process until the Firepede is nothing but a head and falls dead on the track. 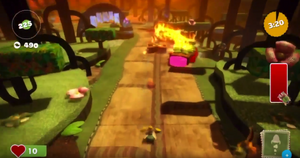 The Firepede's death.
Add a photo to this gallery 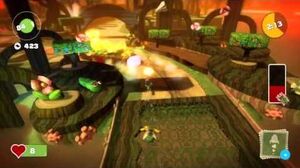 Retrieved from "https://villains.fandom.com/wiki/Firepede?oldid=3889342"
Community content is available under CC-BY-SA unless otherwise noted.