Queen of the Acheron Hive

Advance and propagate the Xenomorph Hive at the expense of any other life.

Kill humans and use them for breeding.
Kill Ellen Ripley for destroying her children (all failed).

The First Acheron Queen is the main antagonist of the 1986 sci-fi/action film Aliens.

She is the queen of the Xenomorph Hive on Acheron, also known as LV-426, in the year 2157. She and her hive wiped out the human colony of Hadley's Hope and was then encountered by a unit of Colonial Marines, including Ellen Ripley.

She was portrayed by Carl Toop.

This Queen came from a batch of eggs in the derelict ship that awakened due to being disturbed by Russ and Anne Jorden, who search the area beyond the colony on Company Orders from Burke on Earth. This results in Russ becoming impregnated by one of the released facehuggers. Anne brings Russ back to their vehicle with the facehugger attached, then sends a signal for help back to the Colony, much to their daughter Newt's horror. While their mistake in disturbing the eggs was similar with Ripley and her friends decades prior, the consequence was far catastrophic than the latter: Most of the eggs stored inside the derelict ship are awakened, and the released swarm of facehuggers immediately invade Hadley's hope. A significant amount of colonists are impregnated which results in an army of Xenomorphs and a quickly established hive. The new hive is built in the area around an Atmosphere Processor. All colonists are wiped out in the battle between the humans and the hive, except Newt who manages to escape and hide in the vents.

When a squad of Colonial Marines under the command of Lieutenant Gorman and accompanied by Ripley arrived at Hadley's Hope to investigate, they were almost wiped out by Xenomorph Warriors in an ambush inside the Hive, with the few survivors forced to retreat. The Queen herself remained unseen deep within the Hive, although Ripley and the other survivors later theorized as to her existence, reasoning that something had to have laid the Eggs they saw prior to the ambush.

Just as Burke exposed to planned on using Ripley and Newt as smuggling vessel for Xenomorphs Embryo, Xenomorphs cut the power supply of Hadley's Hope and captured Newt, resulting Ripley decided to infiltrate the Hive and took her back.

After saved Newt from a newly hatched facehugger, Ripley and Newt stumbles upon a chamber of Atmosphere Processor full of eggs and the Acheron Queen herself. Facing the Acheron Queen alone and surrounded by Warriors, Ripley 'reasoned' with the creature, threatening to destroy all of her Eggs if she and Newt were attacked. Apparently comprehending this, the Queen signaled her circling Warriors to ignore them. However, when one of the Eggs hatched, Ripley incinerated the nest with her flamethrower and destroyed the Queen's ovipositor with grenades from her Pulse Rifle's grenade launcher before fleeing, wounding her. Enraged, the Queen detached herself from her damaged Egg sac and pursued the fleeing humans.

The Queen utilized an elevator to follow Ripley and Newt to the top floor landing platform, where she cornered them on the landing pad. However, Ripley and Newt managed to escape in the Colonial Marines' dropship Smart Ass that Bishop previously sent to the planet via remote control, which arrived before the Queen could close in. During a hasty escape, the dropship collided with the landing pad and collected debris on one of its landing skids, allowing the Queen to hide somewhere in the ship's landing gear, unbeknownst to those on board. Moments after the dropship left, the Atmosphere Processor went critical, vaporizing the Hive and all but destroying Hadley's Hope.

The Acheron Queen revealed her presence and impaled the android Bishop before she tore him into 2, before going for Newt (possibly to secure her as a host for the beginnings of a new hive or perhaps simply to kill her for revenge). Just then, Ripley showed up and fight her with a power loader. The battle ensued, in which the Queen unexpectedly turned the tide of battle by bringing Ripley to the airlock with her. As she was stuck with the power loader that pinned her to the airlock's door, she tries to take her enemy with her as Ripley opened the airlock, expelled to the outer space and pulled by LV-426's gravity, where either re-entry or the fall killed her. But even then she was not entirely defeated, as before her final battle she had smuggled her last surviving egg that would hatch a Super Facehugger that would eventually cause Hick's (presumed) and Newt's death and infect Ripley with another Queen embryo as well as giving birth to more faster, deadly breed of Xenomorph.

Though her hive was destroyed, some of the eggs that kept in derelict ship on the planet revealed to survive the blast, and one of them given birth to another Queen.

Like all Xenomorph Queens, she values and protects her brethren like any good mother would, and had no qualm in killing any non-xenomorph lifeforms whether as enemy or merely host for her facehugger children. This, however, is not above "negotiate" with the Hive intruders had they held her brethren hostage. The instance was shown where she decided to let Ripley and Newt go after threatened to burn the eggs by demonstrating how her flamethrower works. But unfortunately, she ended up deciding to destroy her eggs because one of her eggs unexpectedly hatch, inciting her wrath and immediately give chase on Ripley and Newt.

As a fairly young specimen, the first Queen on Acheron was notably smaller than other examples that have been encountered, as her size appeared to be near half the size of her older Antarctic incarnation. Although, she still towered over the Warriors around her and was a formidable physical presence, standing some 15' high. While she spent most of her life attached to her enormous ovipositor and therefore immobile, when separated she was a terrifying aggressor with sufficient strength to prove more than a match against a Caterpillar P-5000 Work Loader. 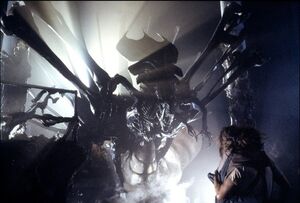 Ripley encounters the Queen for the first time. 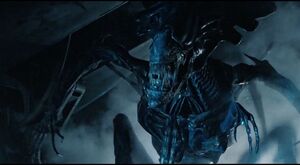 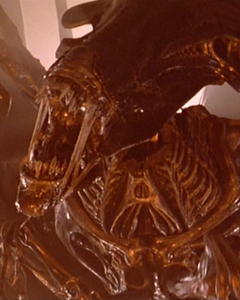 First Acheron Queen's violent breakdown as Ripley burns all of her eggs. 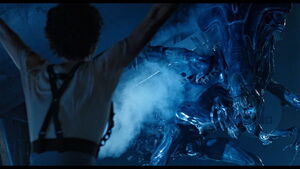 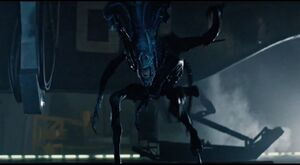 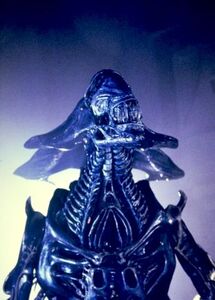 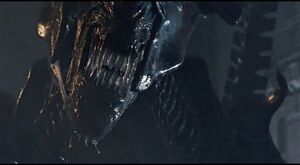 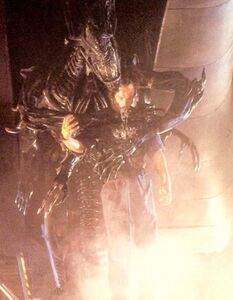 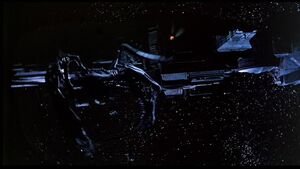