Killing anything and everything.

Live out her sadistic fantasies.

The First "Alice" is a character from the Vocaloid song "Alice of Human Sacrifice", performed by MEIKO, KAITO, Miku Hatsune, Len Kagamine, and Rin Kagamine. She is the Wonderland Dream's first known victim and a serial killer within that world.

She was voiced by MEIKO.

The first "Alice" is a cruel and violent sadist who wishes for nothing more than to carry out her deranged and sadistic fantasies of killing anyone or anything that she sees. She seems to have no regard for anyone else or even much for herself, and only wants to kill. However, this is the corrupted fantasy that she plays out in her mind. It is unknown what she was like when she was awake and not in Wonderland.

It all began when the dream that would later become known as Wonderland decided to live forever by possessing humans and making them dream it forever, causing the dreamer to eventually die and lose their mind in the dream, where it would trap it and use it as an aspect of its ever-evolving world.

The first "Alice" was the dream's first known victim, likely ensnared in her sleep. In this dream world, she carried out her most vile and sadistic fantasies by wielding a giant sword and killing any living thing in her path, leaving a bloody trail behind her wherever she went.

She continued her reign of terror until she wandered into the woods and was captured by the dream itself and trapped in the woods for all eternity. As she was trapped there, her mind was permanently trapped in the dream as she died in real life.

Aspects of her existence were worked into Wonderland's world, including the red path in the woods, the theme of red, and the darker side of the dream world. It is also speculated that her personality and life were transformed into the character of The Jabberwock, though this is unknown.

Despite her horrific reign of violence, the dream incorporated her and her actions into its world well, and the red stains she left behind became the only reminder that she had ever existed.

However, after the arrival of the fourth "Alice", which was in actuality an innocent pair of twins, the dream has them killed by an unknown force. As the video shows the first "Alice" holding a head with blonde hair, it could be assumed that the dream used the posthumous mental remains of the first "Alice" to carry out the task. 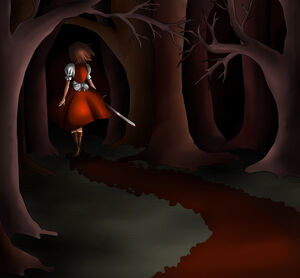 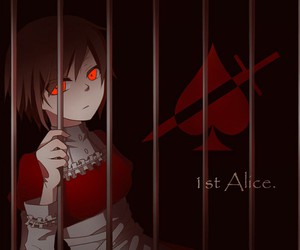 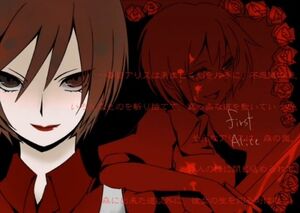 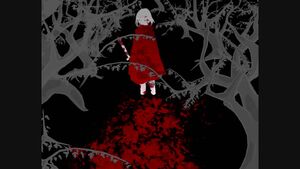 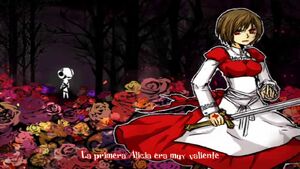 The First "Alice" with the personification of the Wonderland Dream lurking behind her. 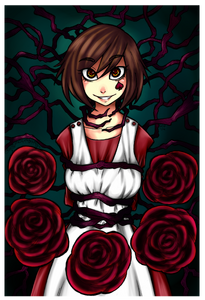 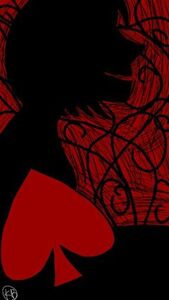 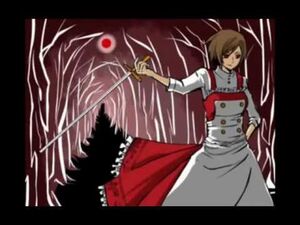 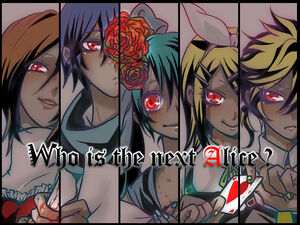 The First "Alice" (far left) with the other "Alices". 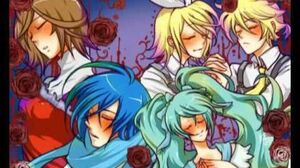