The Fist Sons are a group of antagonists in the inFAMOUS series.

THe First Sons were originally founded back in old Europe where they later went to the 'New World' and sought out those that shared their interests. They were later approached by Richard Tate who became their leader and so went to work on something known as the Ray Shere, they even tried to groom a young Alden Tate into becoming their next leader after the death of Richard. Kessler later took command of the First Sons so that they could work on the Ray Shere faster by experimenting on animals and some kidnapped humans with the conduit gene. As stated by Dead Drops and backstories from some of the characters.

After Cole MacGrath activated the Ray Shere, the First Sons came out of the shadows and took over the Historic District of Empire City. They were first seen after Cole defeated Sasha and brought her back to their base of operation so that they could use her tar to control what is left of Empire City. When Cole went to the Historic District, they were willing to fight against him and was following the orders of their current leader, Kessler.

While they did not appear in inFAMOUS 2, their impact was shown throughout America and their partners known as the Militia was shown to continue where they have left off. 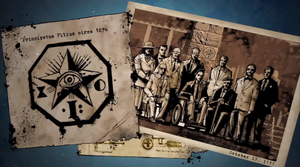 Retrieved from "https://villains.fandom.com/wiki/First_Sons?oldid=3465166"
Community content is available under CC-BY-SA unless otherwise noted.