First of the Fallen

The First of the Fallen, also known as Satan, is a powerful demonic lord of Hell and the main antagonist of DC Comics Vertigo imprint titled Hellblazer. He debuted in Hellblazer #42 (June 1991). He would then become a villain to the Justice League Dark and one of John Constatine's arch-enemies alongside Nergal.

The being that would become the First of the Fallen was originally the first created being in the universe, created to be God's companion and the embodiment of His conscience. However, he soon came to believe that God was insane, and as a result was banished from Heaven and cast down to Hell - becoming the first of many others who would fall. He was joined shortly afterwards by the Second and Third of the Fallen, who the First assumed were beings like him when in truth they were very powerful demons. On the basis of his misunderstanding, the First assumes that the Second and Third share his power and that the establishment of a ruling triumvirate is the only way to prevent a disastrous war in Hell. The triumvirate lasts only until the next banished from Heaven arrives: Lucifer, the most powerful being in existence next to God. However, once Lucifer abdicates, the triumvirate resumed their former positions and delicate truce.

In his ongoing battle against God, the First became aware of another attempt by Heaven to birth a new Messiah and charged the demon Nergal with preventing it. Nergal succeeded in this by infecting a magician named John Constantine with its blood and blackmailing him into sleeping with the Messiah's intended mother, a pure innocent called Zed. Tainted by Nergal's demon blood, Zed became an unsuitable vessel for the Messiah, and Heaven's plans were defeated. However, the First discovered that Constantine was attempting to get the Messiah born through other means, acting as a surrogate father to the daughter of a plant elemental. Nergal attempted to prevent the birth, but was defeated by Constantine and then killed by the First on his return to Hell.

The First came into contact with John Constantine himself in Ireland, where the demon attended the death of an alcoholic who had sold his soul in exchange for the greatest collection of wine in the world. Constantine was also visiting his friend, trying to find a magical cure for his terminal lung cancer, and delayed the First in claiming the soul by tricking him into drinking holy water. This invoked a clause in the contract allowing the alcoholic's soul to go to heaven because it wasn't collected by midnight. The First decided to extract his revenge on Constantine once his cancer claimed his life - but when he came to claim the soul that was his "by right of insult", he found that Constantine had managed to sell his soul to both the Second and the Third of the Fallen. In order to prevent all out war over who would claim the soul, the triumvirate were forced to cure the magician's cancer and save his life; their meager consolation was to do this in the most painful manner imaginable. This only served to increase the First's lust for revenge against the mortal who had bested him.

Things only went worse as the First discovered that Constantine had a spy in hell, the succubus Ellie. In trying to punish the demon, the First was again bested by Constantine, which invoked an ancient law that a demon bested three times by a mortal would receive their torment instead. The First refused to receive Constantine's destined torment, but it didn't improve his disposition towards the magician. The First took this vendetta against Constantine extremely seriously: he once spent twenty years making nightly visits to a priest in an asylum, tormenting him to suicide simply to show Constantine the kind of torment that was awaiting him. The priest was pushed over the brink by hearing the First's confession that he had seen for himself that God was insane and so acted against His will.

The First continued to brood over Constantine, until he discovered the true nature of his "brothers" in the triumvirate. Realising they could not match his power, he destroyed them both and set about claiming Constantine's soul. Unfortunately, the whole plot turned out to be a long-con arranged by the magician: the First of the Fallen was killed by the succubus Ellie, wielding a knife made from the remains of the Second and Third of the Fallen. Instead of true death, however, the First was reincarnated as a Greek fisherman named Theo whilst retaining his memories of his previous existence. He grew close to defeating Constantine with the help of a demon named Buer, but although the First was restored to his previous life and position the magician still managed to escape damnation through more sneaky trickery.

The First contented himself with occasionally tormenting Constantine, as the events slowly came into place to give the demon the closest thing to victory over Constantine that he ever achieved. The magician's plotting had left him and his friends with a magical taint that was slowly destroying their lives: the First removed this and saved Constantine's friends - at the price of his immortal soul. Constantine only managed to escape by convincing God to intercede on his behalf, denying the First of the satisfaction of complete victory.

Whilst his desire to obtain revenge on Constantine seemed to be sated, the First still enjoyed the opportunity of causing the magician pain wherever he could. He passed on the opportunity of purchasing Constantine (thinking that he wasn't being given the genuine article) but as a final twist of the knife convinced Cheryl Constantine to volunteer to remain suffering in Hell after her brother John had successfully arranged her freedom. 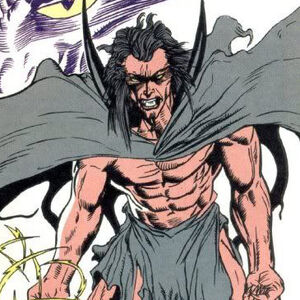 The King of the Inferno 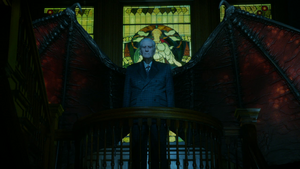 First of the Fallen in DC's Legends of Tomorrow