The Fisherman's real identity has never been revealed. He is a thief who specializes in stealing high tech equipment, then selling it on the black market. He utilizes specialized lures and a fishing rod with a razor sharp hook and titanium-steel line as weapons to entangle his enemies. In his first encounter with Aquaman, the Fisherman uses an experimental formula to turn Aquaman and then himself into a giant. The Fisherman returns many times to fight Aquaman, as well as Blue Devil. The Fisherman confronts the canine Green Lantern G'nort. He makes appears in Roulette's gladiatorial game-house.

The Fisherman is one of the many super-villains to take advantage of the 'villain-friendly' atmosphere of the fictional country of Zandia. He becomes involved in a large confrontation when the team of 'Young Justice' leads a super-powered army against the country for various reasons.

In Infinite Crisis #1 (2005), the Fisherman, along with the Riddler, the Body Doubles, the Scavenger, Red Panzer and Murmur attack Gotham police officers in Cathedral Square.

The attack is elaborated upon in the series "Gotham Central". After a magical accident devastates Gotham, the villain goes on a rampage. Over the prone forms of other officers, the Fisherman confronts Renee Montoya and Crispus Allen. While strangling Allen, the Fisherman is shot dead by Detectives Marcus Driver and Josie MacDonald. Allen and Renee survive. During an autopsy it is revealed that the dead man is not the original villain of that name.

A new, more deadly version of the villain appears in Aquaman: Sword of Atlantis #48-49 (2007), written by Kurt Busiek. The Fisherman's helmet is revealed to be a xenoform parasite, a Lovecraftian alien that attaches itself to every incarnation of the Fisherman and uses telepathy to instill fear in its victims. 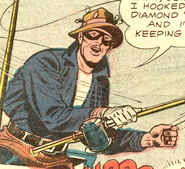 Enemy of the Blackhawk Squadron.
Add a photo to this gallery

Retrieved from "https://villains.fandom.com/wiki/Fisherman?oldid=3325198"
Community content is available under CC-BY-SA unless otherwise noted.