Being crazy about music

The Fist Fighters are recurring characters in the Disney animated series Wander Over Yonder. They are Emperor Awesome's minions. They appear to be fist with bodies and wear blue, purple, and white bodysuits with an "A" on them.

Althought the Fist Fighters look like the good guys, while the Watchdogs are look like the bad guys, actually they are bad guys along with Emperor Awesome.

In the episode "The Party Animal", it is shown the Fist Fighters's leader and Commander Peepers's counterpart, Knucklehead, a guy who represents the nightclub bouncer's true figure. When Sylvia tries to enter into music party that Awesome had prepared to destroy Bobbles's planet, Knucklehead says her that she does not have the correct outfit to go on stage. Upon learning about the dress code, Sylvia gets mad at the knucklehead and says that all the knuckleheads want to do is make every girl look stupid. After Sylvia makes herself look like a clown, the knucklehead allows her to pass through. 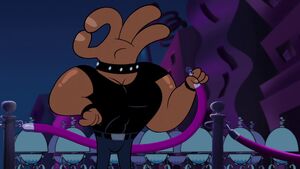 Knucklehead
Add a photo to this gallery
Retrieved from "https://villains.fandom.com/wiki/Fist_Fighters?oldid=2738713"
Community content is available under CC-BY-SA unless otherwise noted.