Villains Wiki
Register
Don't have an account?
Sign In
Advertisement
in: Gangsters, In Love, The Simpsons Villains,
and 24 more

Gangster
Fit Tony is Fat Tony's identical cousin from San Diego and a recurring antagonist in The Simpsons. The only physical difference between him and Fat Tony is that he was in excellent physical condition.

Just like Fat Tony, he was voiced by Joe Mantegna.

Fat Tony dies of a heart attack and is subsequently replaced by Fit Tony, who, due to the stress of running the mob, developed an eating disorder, gained weight, and is rechristened Fit-Fat Tony, which is shortened to Fat Tony. When he became fat, he became identical to Fat Tony, and he took control of the Springfield Mafia. After this, it is as if Fat Tony never died, and all appearances of Fat Tony are actually of Fit Tony[1], similar to the situation of Snowball II and Snowball V. While his cousin was a widower, Fit Tony is a bigamist and philanderer, with at least two wives (including Selma Bouvier) and a mistress. 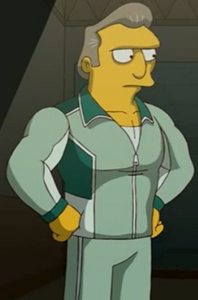