The Five Fingers of Poison

Each members possess their own unique combat and spirit abilities

Monster Team
The Five Fingers of Poison are the elite of Dai Shi's Rinshi monsters and villains from Power Rangers Jungle Fury. They are each a master of poison and are distinguished by the colored sashes that they wear. When the Poisons first engaged the rangers, they easily defeated and they retreated, but the Posions were able to catch up with them, along with Dai Shi in Jarrod's body. After Casey, the Red Ranger, was defeated in combat by Dai Shi, Stingrella poisoned him before they left. However they then started to engage the rangers on their own, (with the exception of Stingerella and Toady, who worked together) and were eventually all destroyed. Dai Shi brought them back for the final Beast War, but they were again destroyed

Rantipede possesses the spirit of the centipede and is able to deliver extremely fast punches, as well as use his centipede tail head to entrap opponents. After their first battle, he decided to finish off the Red Ranger and sent out a challenge, demanding that Casey fight him. However Lily, the Yellow Ranger, showed up instead since she'd been very concerned about Casey. Rantipede battled her and she actually succeeded in taking him on, defeating him jut as the other rangers arrived. He summoned an army of Rinshi, but Casey brought them down with his Strike Rider while Lily brought him down. However Rantipede wasn't done yet and revealed his true face, a centipede tail coiled into a head-like shape, using the rangers' fear at the sight to grow to giant size. He took on the Jungle Pride Megazord and was finally destroyed by its Savage Spin attack. Later on, Rantipede, along with Gakko, was resurrected by Naja to help him overthrow Dai Shi and attacked him in his throne room. However Dai Shi proved able to fight them off with Camille taking on Naja and destroyed Rantipede.

Stingerella possesses the spirit of the scorpion and is the "Queen of the Toxic Dance", named for her dance-like fighting style. She can also unleash an army of scorpions against her opponent. After Gakko's defeat, Toady tried to convince Stingerella to work with him, but she wasn't interested. She then attacked the city with her troop of dancing Rinshi, proving able to outfight the rangers until Toady showed up in giant size. Angered that he'd interfered, Stingerella left, but attacked again only for the rangers, having gotten some training with dance, defeated her Rinshi. However Toady showed up again, declaring his love for the scorpion warrior and they managed to outfight the rangers when they wouldn't work together. Now smitten with the toad warrior, Stingerella left with him and later suggested that he set off a volcano with his bombs to destroy the city. The rangers arrived and fought them, this time succeeding in destroying Toady with the Claw Cannon. Enraged at her beloved's demise, Stingerella grew to giant size and fought the Jungle Pride Megazord, only to be defeated by the Megazord's Super Kick Attack.

Toady possesses the spirit of the toad and can form an extremely powerful shield, as well as throw small spherical bombs. After Gakko's destruction, he proposed to Stingerella, who he was in love with, that they work together to destroy the rangers, but she was completely against the idea, even attacking him for the suggestion. Later Toady was watching her fight with the rangers and mistakenly thought Theo was kissing her, when they were actually grappling with each other. He grew to giant size to "save" her and fought the Jungle Pride Megazord, actually doing quite well, along with surviving the Megazord Finisher, until he saw Stingerella had left and ran off crying. Toady retreated back to Dai Shi's palace, where Camille told him the scorpion warrior was just playing hard to get and he should try and show her his chivalrous side. After Stingerellla's Rinshi were defeated by the Rangers, Toady showed up to protect her, declaring his love for her. He managed to fight off the rangers with his incredible defense and together, the toad and scorpion warriors defeated them. Toady and Stingerella walked off together and she suggested he use his bombs to set off a volcano to destroy the city. However the rangers arrived and they fought again, but when the rangers used their Claw Cannon, Toady's shield proved unable to stop it and he was destroyed.

Naja possesses the spirit of the cobra and wields a pair of swords, which he uses to fire energy blasts. He also possesses life talons, which he can use to reverse death and bring anything back to life and had six at the time he appeared. Naja eventually decided that Dai Shi had become an unfit leader and asked Camille to join him in overthrowing the beast king. However she angrily fought him and managed to take him down with a poison attack, but Naja used a life talon to bring himself back. He managed to easily defeat her and used two more of his talons to bring back Rantipede and Gakko to aid him. They snuck into Dai Shi's throne room to launch a sneak attack, but Camille appeared, engaging Naja while the beat king fought his cohorts. After Rantipede was destroyed and Gakko fled, the cobra warrior made a break for it, but was pursued by Camille, who continued to fight him. Eventually Naja launched a full power energy blast at her, only for her to empower and reflect it, much to his shock. She prepared to finish him off as Dai Shi watched, but the cobra warrior asked her again to join him, reminding her that he had three more life talons. Naja pointed out that Dai Shi didn't even thank her for protecting him, but Camille destroyed the cobra warrior, taking his last three life talons. 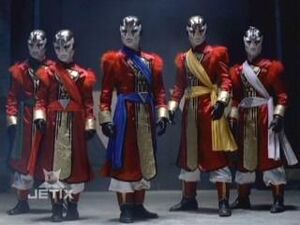 The Five Fingers of Poison in their Rinshi forms.
Add a photo to this gallery

Retrieved from "https://villains.fandom.com/wiki/Five_Fingers_of_Poison?oldid=3964562"
Community content is available under CC-BY-SA unless otherwise noted.