Leader of the Flag Smashers

Restore the world to how it was during the Blip (failed).

Kill her targets and anyone who gets in her way (succeeded for a while, but failed).
Stop the GRC senators voting to avoid the forced relocation of millions of people (indirectly succeeded).

Karli Morgenthau, also known as Flag-Smasher, is the main antagonist of the Disney+ series The Falcon and the Winter Soldier.

She is a masked anarchist and the leader of the anti-patriotism group, the Flag Smashers, with all of the group's members, including herself, having the Super Soldier physiology as a result of the newly-resurfaced Super Soldier Serum that was created by Dr. Wilfred Nagel. Her main goal is to unite the world without borders or symbols, and to share resources to the population since it wasn't being given to them by the Global Repatriation Council. During her movement, she came into conflict with Falcon, the Winter Soldier, and the new "Captain America", John Walker.

She was portrayed by Erin Kellyman, who also portrayed Enfys Nest in Solo: A Star Wars Story.

Much of her life is unknown, but what is known is that Karli Morgenthau was born around 2004-2005, and was an orphan living on the streets of Madripoor until she was adopted by Donya Madani. Madani didn't have much, but she gave her the best life she could, and Karli tried to do the same for her. After the Snap, Karli survived, along with a few others, and saw the world how it could be with food and medicine to share and population control. After the Snap ended and all the people came back, Karli saw that people who came and those that stayed were suffering, abandoned and that the only people who will help them are those that are from the same nation like them.

Soon enough, Donya Madani contracted Tuberculosis, and Karli finally had enough and decided to find a way to help people. She made contact with Sharon Carter, who was known as the "Power Broker", the ruler of Madripoor. There, she learned that Carter's employee, Dr. Wilfred Nagel had re-created a new version of the Super Soldier serum. Karli went back to Madripoor and stole twenty Super Soldier Serums and founded the Flag Smashers, an organization that wishes to unite the world without borders, no matter the cost. After learning that Morgenthau had stolen from her, Carter threatened to kill Karli and her group for her treachery.

In Switzerland, Karli Morgenthau provided masks to the Flag Smashers, so they could rob the Gasel bank. She also provided a mask to Joaquín Torres, who is a member of the United States Air Force and was keeping an eye on Flag Smashers. Following the robbery, Karli disappeared into the crowd with the money, and allowed her teammate, Dovich attack the polcie and Torres, who attempted to arrest the group.

Karli and the other Flag Smashers then traveled to Munich to load up crates and boxes of medicine and vaccines onto transport trucks. While getting the boxes from the abandoned factory, they realized they were being watched by Falcon and Winter Soldier and soon escaped to the highway. Karli hid in one of the trucks pretending to be a hostage while Bucky broke inside and tried to help her, only for her to smile and kick him out with brute force.

She then jumped on top of the truck where Bucky landed and punched him while the other Flag Smashers held him. Upon seeing Redwing flying overhead, Karli jumped and snapped the drone in half. Falcon then flew in and kicked her backward. She and the other Flag Smashers then witnessed John Walker and Lemar Hoskins' arrival, who joined the fight. However, after easily defeating them, Karli and her team escaped.

Karli and the other Flag Smashers then fled to a shelter owned by Rudy, who offered them temporary refuge. Expressing gratitude toward their generous actions, Karli and the others explored the shelter and made it to the bedroom. While they discussed their actions, Nico hacked into the security cameras at the abandoned warehouse they gathered at in Germany to erase the video footage of them smuggling the supplies. Karli then made a speech about their mission and how they can bring down the GRC, asking if the others are still with her. They then announced their chant and took off the next day.

Afterward, Karli and the others traveled to Bratislava where they stole supplies from GRC camps and intended to take off in an airplane. As they loaded the plane, Nico received a message warning him that the Power Broker's men had found them and intended to kill them all for stealing the Super Soldier Serums in Madripoor. To ensure that everybody else escaped, Matias volunteered to stay behind and hold them off, as Karli hugged and thanked Matias for his sacrifice. The pilot had then forced Karli onto the plane as they take off, and Karli watched in horror as Matias was shot multiple times and killed. 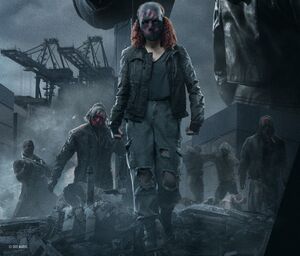 Karli on the promotional poster, along with her allies.

Flag-Smasher during the fight in Munich.