Flak is the Black Hole CO tasked with invading Orange Star and a supporting antagonist in the video game, Advance Wars 2: Black Hole Rising. Of the five Black Hole COs, Flak is the lowest in rank. His brash spirit and few restraints quickly make him the rival of Orange Star's CO, Max.

Flak was initially a low-ranking soldier in Black Hole until he received a promotion from Hawke.

During Black Hole's second attack on the nations of the Wars World, Flak was ordered by Sturm to invade Orange Star. He quickly becomes motivated to conquer Orange Star when he sees two of their COs are women. However, his forces are defeated and he is forced to retreat.

Though he does not play a role in the story mode, Flak appears a purchasable CO. In the story proper, Flak's role as the "brute" of Black Hole is taken by Jugger, leading many to speculate that the latter is a roboticized version of the former. 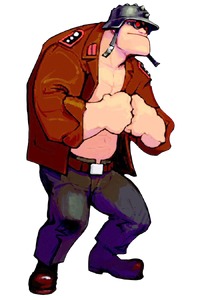 Flak in Advance Wars 2: Black Hole Rising.
Add a photo to this gallery