Hanging out with Francisca.

Flamberge (in Japanese: フラン・ルージュ, Furan Rūju) is a major antagonist in the 2018 Nintendo video game Kirby: Star Allies. She is a member of the Jambastion Cult and one of The Three Mage-Sisters who serve Hyness.

She was voiced by Rie Takahashi.

Prior to the events of Star Allies, Flamberge was a normal girl who was trapped in a fire. Before she suffocated after letting out a fiery scream, Hyness heard her cries and granted her the power of fire. Out of respect, she became one of Hyness' followers alongside Francisca and Zan Partizanne.

After Kirby defeated a possessed Meta Knight, the Jambastion Mages landed their Jambastation on Planet Popstar. Kirby goes to fight them, facing Flamberge right after he defeated Francisca.

Flamberge was furious at Kirby for having harmed her comrade, vowing to make him "BURN" for it. However, she too was defeated by Kirby.

Kirby later found Flamberge taking a break from her mission and slacking off on a fiery planet. Upon seeing Kirby, Flamberge fights him again. After being fought off by Kirby, Flamberge flies to return to her base and is followed by Kirby and his allies.

During Kirby's fight with Flamberge's master, Hyness, the dark officiant hypnotizes Flamberge and the other two Mage Generals to use as weapons to against Kirby. After Hyness is defeated by Kirby, the Jambastion priest uses himself and the Mage Generals, including Flamberge, as offerings to complete the ritual to summon Void Termina.

During the fight with Void Termina, Kirby and friends enter its body and find Flamberge trapped inside along with Hyness, Zan, and Francisca. After freeing them, they are all ejected from Void Termina's body.

Heroes in Another Dimension

Flamberge becomes a resident of the Port Village after Team Kirby defeats Parallel Nightmare in the Empyrean. She can be seen sitting on a ledge to the right, having a discussion with Francisca. She also appears as a sticker that can be bought from the Shoppe for thirty Gem Apples.

Flamberge and the other Mage-Sisters appear as a hazard on the Jambastion Entrance stage, hovering in the background before one of them floats to the foreground to attack. If Flamberge is chosen, she will attack by swinging her sword across the upper corners, releasing fireballs. She can also go to the lower corners and summon her Mega Broiler, shooting a large flame stream across the lower half of the stage.

Flamberge and the other Mage-Sisters appear as a single advanced class support spirit in Super Smash Bros. Ultimate, with the Mage-Sisters represented as three female Robins whose special moves have enhanced power. 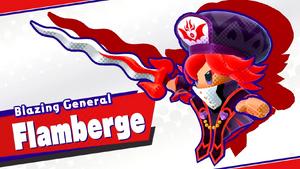 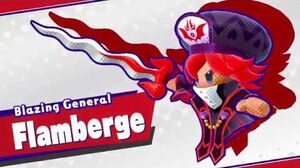 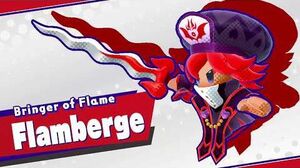