The Flame Box is a minor antagonist and a boss in the video game Kingdom Hearts Birth by Sleep. It is a chest-like Unversed that spews fiery meteors.

The Flame Box resides by the waterside, and can be summoned when a Keyblade wielder investigates its dark energy.

The Flame Box spews a volley of flaming meteors at the wielders, and the wielders must destroy them before they reach the ground or damage them. The Flame Box will constantly change location and speed up the frequency of the meteors as well as their numbers as it continues, and will vanish if a meteor hits the ground. In order to get the highest ranking on the Unversed Mission, the wielder must destroy at least 30 of the meteors. 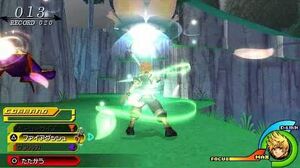