Thousands of years ago (same as the Esoterica)

To serve and worship Diagon.

The Flame Keepers' Circle, also known as the Esoterica, is an influential cult that worships an extradimensional being known as Diagon, who apparently visited Earth at the dawn of mankind to bring knowledge of fire and promised to return to bring Earth to a Utopian state of prosperity. They appeared as an antagonistic group in the Ben 10 series, and both the Flame Keepers' Circle and the Esoterica are also the sworn enemies of the Forever Knights.

At a circus, a preacher found the arch-nemesis of Ben Tennyson, Vilgax, who remarkably survived from their last battle, mistaking him as Diagon. They are a philanthropic organization who take donations and use them to provide humanitarian aid. Recruiting celebrities to spread their message is also common.

After Diagon's heart was cut out and pierced by Sir George's sword, the Flame Keepers' Circle built a cloaked shrine around it. The shrine travels between Diagon's dimension and ours, never appearing in the same location twice.

After Ben's last epic battle with Diagon and Vilgax, the Flame Keepers Circle and the Esoterica were disbanded.

Aside from having access to alien technology the cult's protectors, also known as the Esoterica, uses an extradimensional technology that allows them to manipulate space. They use it to slip into other dimensions making them impossible to see or hit. Their warriors can also manipulate energy for offensive and defensive purposes.

When in uniform, they wear black suits with red skirts, bracelets and scarfs. They also have yellow tatoos with flame designs on their chest and face. They also never believe what others say without proof.

Some of the Flame Keepers circle's members are people who were controlled by the Lucubra. 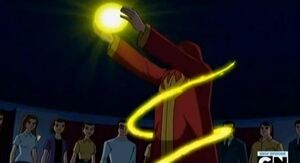 Members of the Flame Keepers' Circle watched the demonstration of Condiut Edwards' power.
Add a photo to this gallery

Retrieved from "https://villains.fandom.com/wiki/Flame_Keepers%27_Circle?oldid=3181956"
Community content is available under CC-BY-SA unless otherwise noted.