The Flame Mammoth is one of the eight Mavericks in the original Mega Man X game. He was a Maverick Hunter from the Forth Overland Unit under Sigma. The Flame Mammoth had an arrogant and cocky attitude, and was extremely proud of his large size and strength. His tendency to look down on those smaller and weaker than him, put him on bad terms with his subordinates, as well as highlighting the potential cause for the tension with Chill Penguin, one of the few higher-ranked members of the Maverick Hunters who refused to join units with him due to their tumultuous relationship. When Sigma began his rebellion, the Flame Mammoth jumped at the call, ready to trample many under his feet. He was voiced by Gerald Matthews in Mega Man Maverick Hunter X.

In battle, Flame Mammoth can spit oil as well as flames. He is also very agile for his size, being able to leap across the room with ease. When he lands on the ground, he will stun X for a second if X isn't in the air. When he's off the screen, he is still able to hurt X, who cannot hurt him. He can also change the direction of the conveyor belt in the room by shouting. His weakness is the Storm Tornado when playing as X and the Banzai Beetle when playing as Vile in the remake. 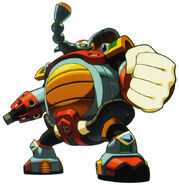