Assassin
Member of the Circus of Strange

Flamingo (real name: Eduardo Flamingo) is a DC Comics villain and a member of the Circus of Strange.

He was an ordinary man with his own family who used to struggle with some criminal organization named the Mob. It lasted until they caught him and brainwashed him into a maniacal serial killer who eats faces of his victims. He killed all of the members of his family and then became a contract killer whose "kill record is impeccable." Eduardo went to Gotham City to deal with such major threats to the criminal underworld as Batman and Robin. After arrival he chased Red Hood and Scarlet to their lair, he shot the Red Hood straight in the head, thus shattering his helmet.

As Red Hood lay shaken from the shooting, Flamingo intended to finish him off. However Scarlet quickly intervened. Flamingo choked Scarlet with his whip and attempted to pull off the mask that had been melted upon her face. Red Hood screamed in protest, stating that it is him who he truly wants to punish. The Flamingo released Scarlet and shot Red Hood twice; tearing off part of his ear and knee-capping him. Batman and Robin soon arrived to stop Famingo from killing Red Hood. The Dynamic Duo were able to keep the Flamingo occupied until Batman was thrown off an edge and Robin was shot five times at point blank range in the back. During the fight with Batman and Robin, Scarlet was able to get behind Flamingo and proceeded to "let the punishment fit the crime" by slashing the right side of the assassian's face. The Flamingo was then hit by Jason driving a bulldozer, while trying to recover from Scarlet's attack. Red Hood then dumped a mass of rubble onto Flamingo. It appeared as if he was killed, but there is no sign of a body when the authorites arrived.

Flamingo makes a cameo appearance in "The Knights of Tomorrow!" (towards the end).

Eduardo Flamingo appears in the ninth episode of the second season "A Bitter Pill to Swallow". He is played by Raul Castillo. 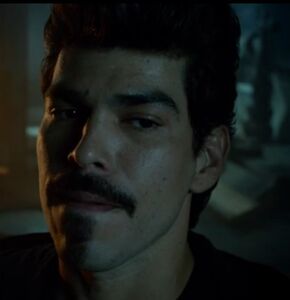 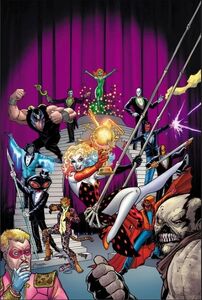 Add a photo to this gallery
Retrieved from "https://villains.fandom.com/wiki/Flamingo?oldid=3469338"
Community content is available under CC-BY-SA unless otherwise noted.