Flamo is an being of pure solar energy whose race inhabits the nuclear inferno of the sun's photosphere and also is the main villain in the episode "Inhuman Torch". Flamo told Bender that, a billion years prior, he attempted to overthrow the democratically elected aldermen from his district, but was captured and imprisoned. He claims that no power on Earth can extinguish him.

In 3013, after a mission to the solar helium mine, Bender unknowingly transported Flamo to New New York, where Flamo then set many fires, framing Bender. Flamo was planning to make his way to Earth's core, to turn the planet into a miniature sun that he could rule, so Bender took him to the Arctic, where Flamo could not do any more harm. However, after Fry arrived in the Planet Express ship, Flamo managed to escape to the Planet Express headquarters, where he then started a fire. He evaded the rest of the crew, who were putting out the fire, and went into the lava pit beneath the building, but Bender caught him, and the mystic aldermen of the sun came to take him back. 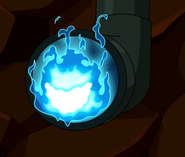 Flamo hidden in a basket of wet towels and evil grin.

Flamo before entering the lava pit and reaching the core of the earth.

Flamo captured by the Sun aldermen where he will be prosecuted and punished for his crimes.
Add a photo to this gallery
Retrieved from "https://villains.fandom.com/wiki/Flamo_(Futurama)?oldid=3889352"
Community content is available under CC-BY-SA unless otherwise noted.