Villains Wiki
Register
Don't have an account?
Sign In
Advertisement
in: Tom and Jerry Villains, Torturer, Sadists,
and 14 more

Teeth
Strength
Ability to survive outside of water

Torturer
Flappy is anbad-tempered pike that antagonizes Tom, Jerry, and Spike in the 1947 Tom and Jerry short "Cat Fishin'". He is an angry and vicious fish that seeks to eat whatever he feels like, whenever he feels like and is not about to let anyone get in his way.

Flappy appears when Tom uses Jerry as bait for fishing. Jerry runs, causing Flappy to give chase, eating Tom's fishing pole in the process. He proceeds to slap Tom with his tail, then smack the reel at his face before returning to the water.

Tom casts Jerry again, and Flappy awaits him with a plate and utensils. He tries to impale and eat Jerry again, but Jerry escapes and squirts him in the eye with a lemon. Flappy gives chase again, and Tom smacks the water in an attempt to get him. He hits Jerry instead, who knocks him into the water and ties a lure to his tail, causing Flappy to bite it and begin pulling Tom. Tom resists, and ends up flinging Flappy at a sleeping Spike. Flappy his Spike and slaps him before retreating back into the water for good.

Flappy is a wrathful, hot-tempered fish with an enormous appetite. He openly antagonizes anyone he comes across, usually through physical harm or attempt at physical harm. He is vicious and cruel, not caring about anyone or the consequences of his actions. 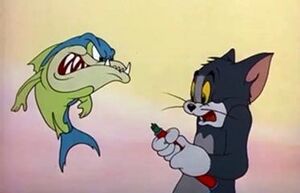 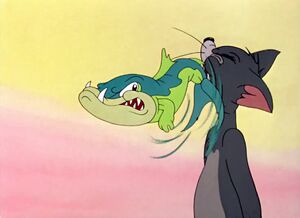 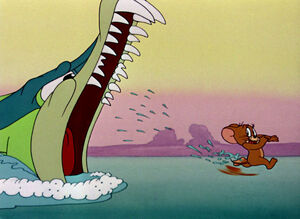 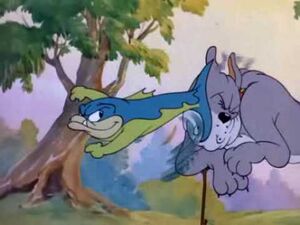 Flappy Slaps his tail on Spike in his face 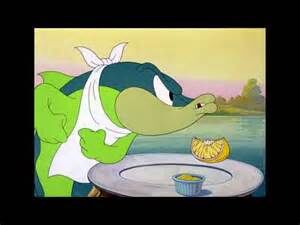 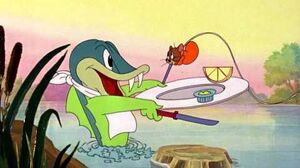 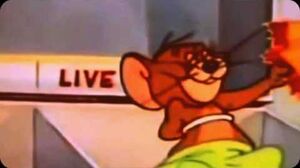