Plunge the world into tedium (formerly).

Flappy Bob is a recurring character of The Fairly OddParents and a central antagonist turned deuteragonist in 2005 movie School's Out! The Musical.

He is the original founder of Flappy Bob's Camp-Learn-A-Torium (which was shown in a few other episodes).

He was voiced by Stuart Bullock.

Thirty-seven years ago in Kansas, Flappy Bob's clown parents shot him out of a train with a rocket when he was a baby for his safety because it was about fall off a bridge. Although, the train was actually on a safe track. He was found and "raised" by H.P. and Sanderson for the next 37 years. They often taught him about boring being fun and essential in everyday life, which included him winning the love of an unknown woman (it's unknown if he married her or not) and graduating from Harvard Law School with money and blueprints for developing Camp-Learn-A-Torium thanks to the Pixies.

Flappy Bob appears at the town meeting and recommends them to attend his all-summer long camp. Shortly afterward, Timmy wishes for kids to rule the world. Enraged, Flappy Bob confronts Timmy about it. H.P. and Sanderson dropped by and introduced themselves to Flappy. He signs the Pixie contract for him to take control of the world with the free pen Timmy gave him earlier.

At Camp-Learn-A-Torium, Flappy overhears the Pixies and realizes that he had been used for the past 37 years. He appears in his clown outfit and decides to work with Timmy to bring fun back to the world, which brought H.P. and Sanderson down to earth. After pointing out the loophole in the Pixie contract, H.P. nullifies the contract, and the world went back to normal. Flappy was able to reunite with his parents and was seen singing with everyone else at Camp-Learn-A-Torium. 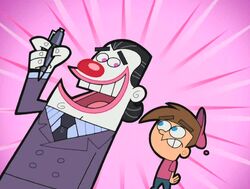 Flappy Bob in his clown make-up. 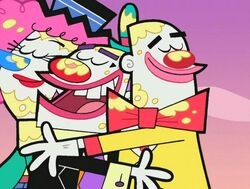 Flappy Bob's redemption after reuniting with his long-lost parents.