Smile in a disturbing way.

Return to her home.

Redeemed Mage
Flare Corona is a former Dark Mage, as well as one of the elite members of the Raven Tail guild. She is one of the characters in Fairy Tail and a supporting antagonist during the Grand Magic Games Arc.

She is voiced by Shizuka Itō in the Japanese version, and by Alex Moore in the English version.

Flare is a pale young woman with big eyes and long flamed red hair. She carries a scar under her right shoulder and the symbol of her guild (and later a symbol of her village) on the right breast. She is dressed in a long red dress with a deep neckline and a thigh split left, combined with long gloves and high-heeled shoes of the same color. Although Flare is a beautiful girl, she usually keeps her eyebrows perpetually raised and often shows herself with a half-open mouth. She also has 2 deep dark circles that contribute to giving it a deranged appearance.

As Raven Tail's Mage, Flare demonstrated in the fight against Lucy the most obscure aspects of her personality; she showed herself to be susceptible to sudden outbursts, to the point that when she was put in trouble by Lucy she completely let herself go to a furious scream. Not to mention her extremely sadistic, blackmailing and vindictive nature, to the point that she not many problems have been posed to threaten the life of a little girl (Asuka O'Connell) to prevent the her opponet from reacting to each of her attacks. She also shows her cowardice when Lucy frees herself from her grasp and tries to try to attack her with Uranio Metra while Flare limits herself to trying to protect herself unnecessarily, only to show arrogance when her partner Obra protects her and apparently makes her win the fight.

After the dissolution of Raven Tail, she proves sorry for her questionable actions against Lucy. She tried to make amends first by saving her (in the anime) from an attack by dragons during the Eclipse arch, then she kept an eye on her and rescued her and Wendy during the Sun Village arch. As she then tells the two Fairy Tail mages, Flare reveals that she left her family of giants and the Sun Villagie because she could not find her role and that was partly the reason that led her to know the outside world and, unfortunately, to join Raven Tail, convinced that their morally evil actions were of normal human society. She cares a lot about her blessed hair and she coming to rage when someone damages it, as she becomes fiercely protective of her village of origin. 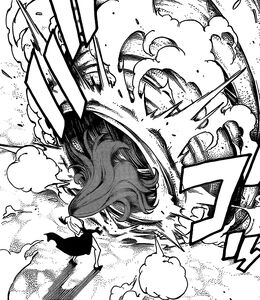 Flare uses her own hair even as a means of defense to protect herself from attacks.