Eighth Wonder of the World

To avenge the death of her children at all costs

Flat Dog is the titular main antagonist of the 2000 horror film, Crocodile, as well as the titular secondary antagonist of its 2002 sequel, Crocodile 2: Death Swamp. She is a legendary crocodile inhabiting a lake in Southern California; she was brought from the Nile River by an old hotel owner to be used as a sort of tourist trap.

Originally Flat Dog was some-what docile, humans did not bother her and she was primarily concerned with the safety of her children. In spite of the fact that she had good history with humans whom raised her when she was little, Flat Dog was ultimately become vituperative and resentful of them after two local fishermen destroyed her nest and smashed most of her eggs, resulting in her become bitter and murderous. She lashed out on any humans whom she encounters, dismembered them and devoured only a portion of their mangled remains. Her rampage briefly ends with her reunited with her newly hatched offspring, in which she finally find a peace as she left the protagonists alone.

Sadly, after criminals whom caused the crash of the plane near their territory killed her offspring in cold blood, Flat Dog's resentment on humans become hatred, and in blind fury, killed the very criminals whom killed her offspring in cold blood. Her young's death takes its toll on Flat Dog, and she is pushed to the point of becoming more homicidal than ever, which is apparent as she winds up chasing Zach and Mia who had nothing to do with her offspring's death. Flat Dog goes out of her way to eliminate targets in the most violent way she can and in Crocodile 2: Death Swamp, it is shown precisely how much she is prepared to prey on humans who invade her territory. Explosions, barely seem to phase her signifying a single-minded focus on her next kill over her own safety once she is in her frenzied mind-set. The only thing that enabled her to find the peace once again is to put her out of her misery.

According to Kit, in the early 1900s, 96 years ago, a hotel owner named Harlan featured a crocodile named Flat Dog at his hotel and kept her as her pet. Harlan's fanaticism on Flat Dog resulting him sets up a shrine to her, believing her to be an avatar to the ancient Egyptian crocodile god (Sobek) creating a cult that worshiped the crocodile. The town eventually ran Harlan away because of his heathenism and torched his hotel years later when Kit was a kid. By the time Kit tell this story to his friends, Brady, Claire, Duncan, Annabelle, Sunny, Foster and Hubs, two local fishermen destroy Flat Dog's nest, only for them both to be attacked by Flat Dog herself who devours them both.

The following day the teenagers continue to party. Annabelle's dog, Princess, runs away, leading the group to Flat Dog's nest, where Duncan breaks an egg and Hubs hides one in Claire's bag. At night, Sunny becomes incredibly drunk and reveals Brady cheated on Claire with her, resulting in Claire breaking up with Brady. Hubs, who is also heavily intoxicated falls asleep at the bonfire while the rest of the group return to the boat. Sometime later, Hubs attempts to return to the boat but is eaten by Flat Dog, while the boat becomes untied and begins to drift in the lake. In the morning, the friends find their boat has become stuck, leaving them stranded. While the rest of the group attempt to fix the boat, Brady and Sunny go to try to find Hubs. Sunny attempts to get Brady to go swimming, but she narrowly escapes an attack by Flat Dog. The pair rush back to the boat to warn the others. However, Flat Dog arrives and sinks the boat, killing Foster in the process.

Meanwhile, Sheriff Bowman finds the fishermen and Hubs remains before visiting Shurkin and Lester, two locals who take care of alligators. Shurkin sets out with the Sheriff to find Flat Dog - and kill her to avenge the deaths of his grandfather and father - while Lester is seen to be feeding the crocodile, but is eventually devoured himself. As night falls, the teenagers are still stranded in the woods searching for a road. Flat Dog returns, and ultimately Sunny is eaten. The rest of the group reach a small shop, where Brady attempts to phone the Sheriff, but Flat Dog breaks through a wall wounding Duncan by bitting him in the foot and devours Annabelle. As Kit escapes to start the truck outside, Brady, Claire and Duncan fight off Flat Dog. In the chaos, a fire starts which causes the truck to explode, killing Kit and scaring away Flat Dog.

The next day, the Sheriff and Shurkin find Brady, Claire and Duncan and pick them up on their boat. Soon after, Shurkin is knocked into the water and eaten, before the Sheriff is also killed. With the boat's engine broken, the survivors swim to land. Upon reaching the shoreline, Claire found the crocodile's egg in her backpack and the group decided to fight back against the angry crocodilian. Sharpening sticks into spears, they waited for Flat Dog to come on land and regain her stolen egg. The wait wasn't long and before the crocodile even reached its egg, Brady charged forward and stuffed his spear into its maw. The teenager was forced back but not killed, and next up was Duncan. He also charged forward and tried to blind the monster by holding his sweatshirt over its eyes. Annoyed, Flat Dog merely threw her head back and swallowed Duncan whole, but thanks to all of the bug repellent on him, he was thrown up by the reptile and saved. As Brady revived Duncan, the egg began to hatch in Claire's hand and the baby reptile fell into its mother's tooth-filled maw. With her young back, Flat Dog turned around and left the trio in peace and returned to the water.

For the following year, she raised her surviving offspring and it steadily grew. However, when a plane crashed into her domain, her 15-foot child was shot and killed by the ruthless and traitorous criminals that caused the crash in cold blood. Enraged, the massive crocodile began to follow the few survivors of the crash. She began to indiscriminately pick them off one at a time, leaving a bloody trail of carnage through the swamplands. Mia’s boyfriend, having learned of the crash back in town, hired his own escort to help him locate his missing girlfriend within the swamps. Upon reuniting, the group was suddenly ambushed by the furious giant animal.

The reptile killed two of the party and trapped the others in an abandoned structure in the middle of the wetlands. However, the shelter could only last for so long. The reptile managed to bring it down, sinking the flimsy structure and sending the struggling group fleeing. With the criminal ranks broken down and only one left, the survivors finally thought they reached safety upon arriving at the helicopter. However, the unpleasant and monstrous crocodile brought down the helicopter and began to chase Zach and Mia as they attempted to escape by raft. Unable to keep up with the speed gifted to the raft by its motor, the crocodile was lured into a section of the swamp filled with methane. Canisters of gasoline were poured into the dark water and ignited, setting off a chain reaction. The legendary beast was engulfed in several explosions, with her body ripped apart and burned. At long last, the deadly reign and misery of the vengeful, man-eating, and carnivorous reptile was ended.

Flat Dog is a seasoned hunters and once enraged becomes excessively brutal. Her up-bringing around humans has lead her to be able gauge human behavior well. She seems to prefer exceptionally excessive uses of force and has an idea of what substances are volatile enough to explode. Explosions themselves and uses of blunt forces seem to have little-to-no effect on her, this is either from particularly think skin or, more likely, an intense focus on her goals which she uses to ignore pain. She can swim and high speeds and is adept at moving on land and sea without being noticed until she is right on top of her prey. She gives birth to 15-foot Nile crocodiles. Her hatchlings' scale color is unknown but their eye color was either orange or red. 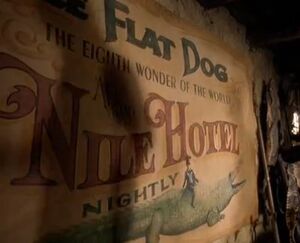 Flat Dog the eighty wonder of the world. 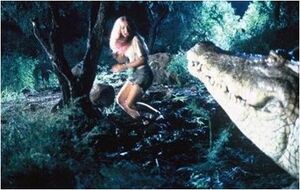 An enraged Flat Dog stalking Sunny in the woods. 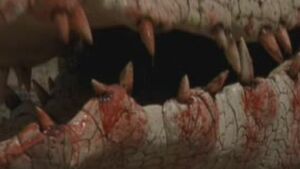 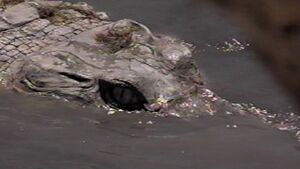 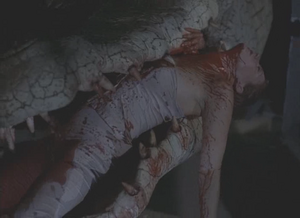 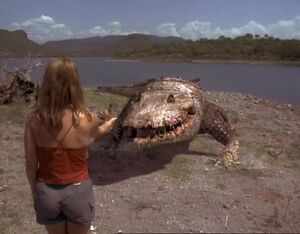 Flat Dog heading towards Claire to take back her last egg. 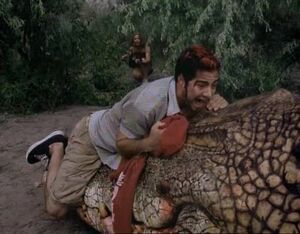 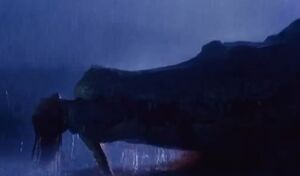 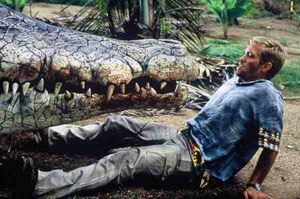 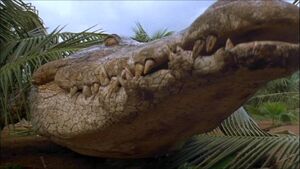 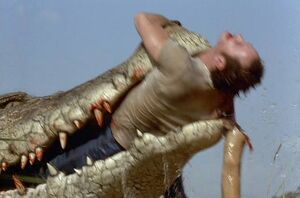 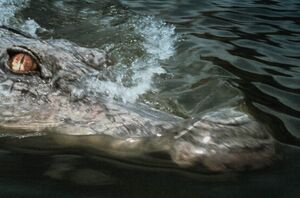 Flat Dog, minutes before she explodes into pieces.
Add a photo to this gallery 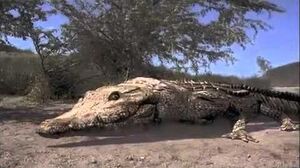 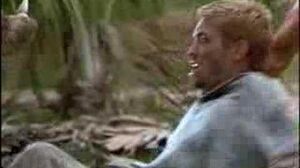 Crocodile 2
Add a photo to this gallery

Retrieved from "https://villains.fandom.com/wiki/Flat_Dog?oldid=3773222"
Community content is available under CC-BY-SA unless otherwise noted.