Win the tournament hosted by the League of Lazarus (ongoing).

All my life I was drawn to death. Being born with the power to absorb the skills of people as they die might have had something to do with it. FLATLINE TALKING ABOUT HER PAST WITH ROBIN.

Flatline is supervillain and an antagonist in DC Comics and an enemy of Robin. The teenage sidekick of minor Lord Death Man, Flatline was a martial artist so skilled that she could rip a person's heart out with her bare hands.

She was created by Joshua Williamson and designed by Gleb Melnikov, and first appeared in Detective Comics #1034 in March, 2021.

Flatline's grey skin was the color of ash, her eyes were bright purple, and her short, messy hair was bone white. She wore black lipstick and had a white skull painted over her face. She wore primarily black and white clothing, consisting of black waist-high pants with bone patterns, a large waistline white belt with a white buckle, a black choker, white boots with a crossbones pattern on them, black fingerless glove that also sported white crossbones, and a black jacket with white bone patterns and spikes on the shoulders. On the back of her jacket was a red line reminiscent of a "flatline" that appears on medical machinery. Overall, her appearance was meant to evoke death.

The girl known as Flatline was trained in martial arts by "some of the greatest fighters to ever die" and was the sidekick of Lord Death Man, a criminal with regenerative powers who operated in Gotham City. She was relatively new to her partnership with Death Man, and he rarely allowed her to act independently. Due to her martial prowess, Flatline was approached by the ancient and enigmatic League of Lazarus. The League offered her a place in an upcoming tournament they were hosting on Lazarus Island wherein the world's greatest fighters would battle one another to the death. Those killed on the island would come back to life two times before suffering a final death. The reward for winning the tournament was the gift of immortality.

On the day of the tournament, Flatline and the other combatants gathered on the Island and listened to the League's representative Mother Soul introduce the legendary event. However, Mother Soul was interrupted by Robin, the son of Batman, who arrogantly flaunted his belief that he would claim victory. He asked the fighters to step forward and face him, a request that Flatline fulfilled. After sustaining a single punch from Robin, Flatline explained why she was superior to him as she overwhelmed his defences and ripped out his heart. As Robin fell to the floor dead, Mother Soul explained the rules and intricacies of the island. Among the rules was that combatants could only fight while the sun was up.

The next morning, Flatline participated in the free-for-all battles on the beach of the island. She fought the English assassin Lady Vic, and awkwardly apologized after she impaled the supervillain with her own sword. Shortly thereafter, Flatline witnessed the revived Robin show off his skill by brutally executing several fighters simultaneously. Robin signalled Flatline to let her know that he would be watching her, although instead of taking his threat seriously she playfully winked at him. She later fought and defeated the martial artist Constantine Drakon. At night, Flatline decided to follow Robin, who was heading out of the base camp into the heart of the island. Her reason for doing so was because she wanted to become better acquainted with him. Robin noticed her presence and begrudgingly allowed her to follow him.

Together they discovered Mother Soul speaking with other League members at the base of a large Lazarus Pit, a mystical pool of liquid that could rejuvenate or resurrect those that bathed in it. Flatline went to ask Robin what he thought the League were up to, although he had already vanished. She then headed down to the beach where the tournament participants were socialising and having a good time while the night time truce was still in affect. Eventually Robin entered the gathering with the mercenary Ravager in tow. Flatline approached him and asked him why he had ditched her, although he ignored her and performed a knife trick that impressed the gathered combatants. The fighters began regaling each other about their experiences with Batman which prompted the dejected Robin to leave, as he didn't enjoy living in his father's shadow.

The next morning, Flatline was basking on the beach next to Connor Hawke when Ravager approached the pair and asked them if they had seen Robin anywhere. Flatline reported that to her knowledge no one, including herself, had seen him since he had left the party the previous night. During Robin's supposed disappearance, Flatline stole a romance manga from the martial artist XXL that had originally belonged to Robin.

Shortly thereafter Ravager was killed by Respawn, marking her as the final combatant to die for the first time. With everyone having died at least once, the League of Lazarus began using their magic to build an arena where the true tournament would commence. As the priests erected the structure, Flatline had to break up a fight between the disgruntled Ravager and Respawn. As the sun came up, Robin returned and declared that he would defeat those who had bested him. The fighting then commenced, during which Flatline ripped the heart out of the Hasaraguan interrogator Brutale. After defeating Brutale, Flatline sat by Robin on the bleachers and spoke with him about the other fighters and the state of the tournament in general. She returned Robin's romance manga to him and briefly told him about her personal history.

Flatline moved under the bleachers with Robin where they met with Ravager and the son of Green Arrow Connor Hawke to speculate on the true purpose of the tournament and what Mother Soul and the League of Lazarus may be planning. They were then interrupted by Respawn, who threatened the group and boasted that he would be the tournament's sole victor as he was not afraid of dying. Later, the final eight competitors, including Flatline, met one another in the arena for the final round. Flatline personally duelled Drenched, a young man who could channel electricity. 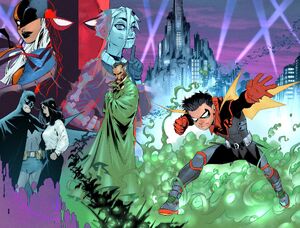 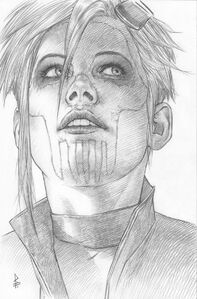 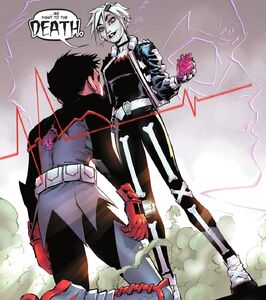 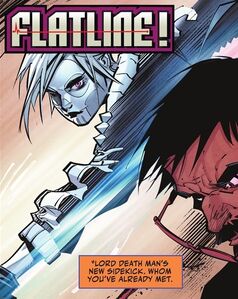 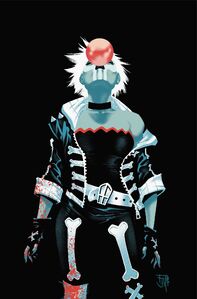 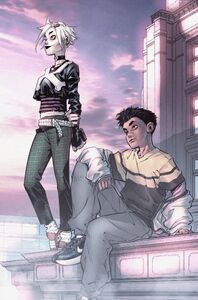 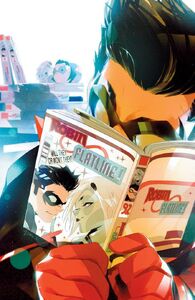