Leader of the human-eating giants

Continue to feast humans and children.

Kill the BFG and eat Sophie (both failed).

The Fleshlumpeater is the main antagonist of the 1982 book The BFG by the late Roald Dahl and it's 1989 and 2016 adaptation of the same name. He is the leader of a race of giants that tormented the BFG and would arrive in the human world during the night to eat humans, mainly children.

He was voiced by the late Don Henderson in the 1989 film adaptation, and portrayed by Jemaine Clement (who also portrayed Nigel in Rio, Boris the Animal in Men in Black III, and Tamatoa in Moana) in the 2016 film adaptation.

Similar to his animated counterpart, Fleshlumpeater holds contempt towards the BFG for his compassionate side and refusal to eat humans. However, he is shown to be very obstreperous and childish, as he throws a temper tantrum at the BFG when the latter initially refuses to tend to a tiny cut on Fleshlumpeater's finger. He is also shown to be aquaphobic along with the other giants, as they hid in fear when a boisterous thunderstorm came in and when he refuses to touch the water that BFG is offering to use to tend to his finger cut.

The next day, Fleshlumpeater heads to the BFG's home, complaining that he didn't get enough sleep last night because of the BFG's talking. As Sophie hides inside a snozzcumber, Fleshlumpeater sniffs around, believing that a human has taken refuge. He is then about to eat the snozzcumber that Sophie is hiding, only to be reminded by the BFG that he and his group hate vegetables, something which Fleshlumpeater concurred on. He then leaves, stealing one of the BFG's frobscottle bottles along the way.

When the BFG heads off to do his job catching dreams with Sophie, he accidentally wakes up Fleshlumpeater and his gang, who then start to bully him by playing a rough game. While Sophie manages to avoid detection, a thunderstorm came, which suddenly frightens Fleshlumpeater and his gang into taking refuge, allowing BFG and Sophie to enter to Dream Country. However, Sophie accidentally leaves her blanket behind, which is found by Fleshlumpeater. At that time, the BFG reveals to Sophie that he once took and raised a human child, who was later found and eaten by the giants.

Believing that a human child is in Giant Country, Fleshlumpeater waits until the BFG and Sophie returns back to the BFG's home. As Sophie hides away, Fleshlumpeater and his gang confront the BFG for hiding a human from their presence. They start searching around, messing up his workshop and collection of dreams he captured over the years, though Sophie still manages to evade detection. This deplorable behavior finally drove an angry BFG to stand up and drive off Fleshlumpeater and his gang with a heating iron rod.

Knowing that the giants have done enough, the BFG and Sophie formed a plan to get rid of them. Under Sophie's directions, the BFG forms a nightmare of giants eating the children of England, the British Army fighting the giants, and Sophie appearing on her windowsill at Buckingham Palace. Heading onward to Buckingham Palace, the BFG gives the nightmare to the sleeping Queen Elizabeth II, who wakes up and learns of a news report that several children have gone missing, right before Sophie and the BFG reveal themselves to her. Deciding to take matters into her own hands, the Queen dispatches soldiers to follow the BFG to Giant Country.

In order to ensure that the plan goes well, the BFG creates another nightmare that Sophie had caught before, but is distraught to see that he left his dream trumpet back at Buckingham Palace. Sophie decides to take matters by smashing the jar, allowing the nightmare to consume the giants' minds. However, being awakened by Sophie's presence and spotting her, Fleshlumpeater manages to avoid the nightmare and is about to kill Sophie, only for the BFG to stand up for her. Grabbing the BFG by the waist, Fleshlumpeater is about to kill him until the soldiers use their grappling hooks to hold him in place, saving both the BFG and Sophie.

With the giants finally compromised, the soldiers transport the giants via helicopters to a remote island far away from civilization. As Fleshlumpeater makes it to shore after being dropped along with his gang, he heads over to the top of the island, where he finds another helicopter dropping snozzcumbers on him, much to his anger. The giants were also given a huge supply of snozzcumber seeds to feed on for the rest of their lives, much to their horror. 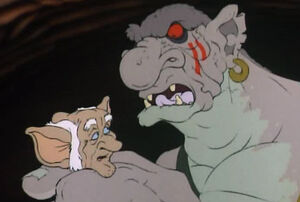 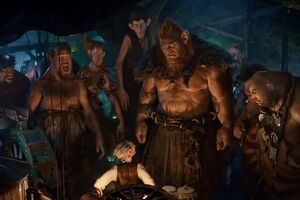