Kill everyone around him and himself (succeeded).

Evil Flippy, or Fliqpy, is the main antagonist of the internet series Happy Tree Friends. He also appears in its spin-off miniseries Ka-Pow!. He is the evil personality of Flippy. He is considered to be one of the most popular characters of the series.

He is voiced by Aubrey Ankrum.

Evil Flippy (Fliqpy) is a green bear who wears dog tags around his neck and a green beret with a checkered crest on his head. He has lime green eyes and a wicked grin.

He is a retired veteran soldier in the Army. He fought in the Weaponized Animal Regiment (The W.A.R), and he has an obsession with making booby traps inspired by the Viet Cong, as well as a flashback of his experience of being held captive by them (as seen in Easy For You to Sleigh). In addition, his attire seems to resemble to the U.S. Army Special Forces, which played a role during the Vietnam War. As he fought for years, he was promoted to the rank of sergeant. According to writer Warren Graff, Flippy is mostly based on John Rambo and the Incredible Hulk. During the Internet and TV series, it is unknown if Flippy has retired from the Army or if they are simply in a time of peace. Flippy rarely appears in the series, most likely due to his repetitive behavior in most of the episodes in which he appears.

Flippy suffered the trauma of the deaths of his partners. Since then, he has developed Post Traumatic Stress Disorder (PTSD). Episodes where he appears first depict him as a friendly character. If exposed to anything that reminds him of warfare (weapons, gun-like sounds, and many more) he would flip out in anger - hence his name - and kill anyone around him. His flipped out form is usually accepted as Fliqpy or Evil Flippy.

Flippy has no idea of his kills after he reverts back. In the episode Double Whammy, he found out and went to seek professional help. In Part 2 of the episode, he came into a battle with his evil self, soon discovering that he was just making it up in his head. After defeating his evil self, Flippy seemed to be cured, though was killed at the end of the episode. Fans believed that Flippy was cured of his illness from that episode, though his later flip-out in the short On My Mind dispelled the rumors. In Random Acts Of Silence, Flippy flips out again when he heard the alarm go off while Nutty and Sniffles tried to exit the library.

Fliqpy always carries a bowie knife and multiple grenades but generally prefers to improvise his weapons from everyday objects, even once skinning Shifty alive with a christmas tree cookie in Easy for You to Sleigh, or even the bodies of other victims, like he strangles Giggles with Cuddles' intestines in This is Your Knife.

Despite being called Evil Flippy, it was confirmed by one of the show's creators named Kenn Navarro on November 30, 2015 that Fliqpy is acting under the delusion that he is still in the war and does not realize that he is killing innocents, making it difficult to actually consider him evil. He wants to kill himself. It is unknown if Fliqpy would act the same way if he knew his victims were innocent civilians, not enemy soldiers. 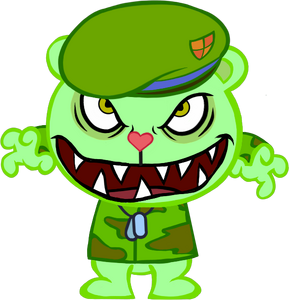 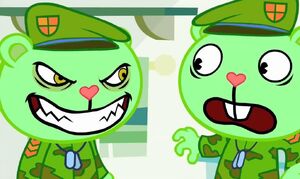 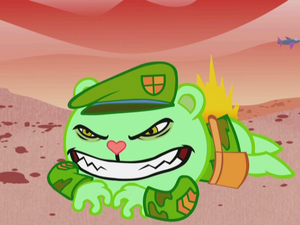 An example of Flippy's killings being the result of hallucinations. 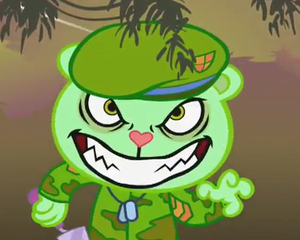 Fliqpy's evil grin.
Add a photo to this gallery

Retrieved from "https://villains.fandom.com/wiki/Fliqpy?oldid=3332615"
Community content is available under CC-BY-SA unless otherwise noted.