Flotsam and Jetsam are the secondary antagonists from Disney's 28th full-length animated feature film, The Little Mermaid. They are moray eels serving as loyal minions of Ursula the Sea Witch.

They were voiced by the late Paddi Edwards, who also voiced Gozer in Ghostbusters.

The deal was that if Ariel could get Eric to kiss her within three days, she could remain human forever, at the price of not being able to speak and not getting to see her father or her sisters. If she couldn't, she would turn back into a mermaid and by bound to Ursula forever. When Ariel's friends, Sebastian and Flounder, attempted to stop her, Flotsam and Jetsam wrapped themselves around them to keep them quiet. However, they let them go after Ariel is finally turned into a human, allowing both Sebastian and Flounder to take her up to the surface.

Durring the climax of the film when Ursula succeeds in becoming ruler of the ocean, Flotsam and Jetsam chase after Prince Eric when he headed back up to the surface, and dragged him back underwater. When Ursula attempted to kill Eric by shooting him with Triton's magic trident, Ariel pulled the Sea Witch's hair back, causing her to kill the eel duo by accident instead. 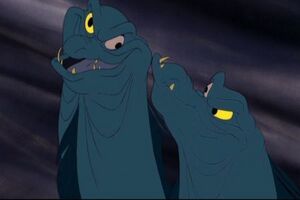 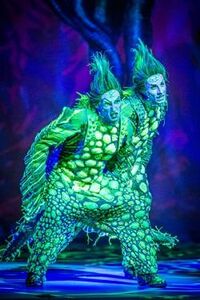 Retrieved from "https://villains.fandom.com/wiki/Flotsam_and_Jetsam?oldid=2533863"
Community content is available under CC-BY-SA unless otherwise noted.