Parent of the Flukes

Storing its young in its orifices

Birth as many hostile offspring as possible (failed).

Flukemarm is a supporting antagonist and optional boss in Hollow Knight. It is the parent of the multitude of Flukes that flourish in the Royal Waterways of Hallownest.

Flukemarm was the parent of the Flukes in the Royal Waterways. While little is known of its life, its only known hobby was breeding and guarding "treasure" within the Junk Pile through its most intelligent offspring, the Fluke Hermit. Following the Infection, Flukemarm gained the obsessive goal to breed as many offspring as possible and repopulate the dying kingdom with its young, even if it means killing off the other species in order to dominate the kingdom. The Fluke Hermit, the only non-infected fluke, fled to above the Junk Pit in terror of her mother's glow.

Flukemarm is located in the bottom-left corner of the Royal Waterways, hidden behind a secret breakable wall in the room with flukes and Flukemons. At first, Flukemarm is resting and will not attack the player until it is attacked first.

Flukemarm itself cannot attack the player, instead summoning two aggressive Flukefeys from two of its six orifices at a time following a span of a few seconds. Flukemarm signals which orifices will spit out Flukefeys by spewing out bile before spitting them out. While the Flukefeys can be defeated in one or two hits, their rapid movements will quickly outnumber the player if they focus on fighting Flukemarm or concentrate on healing, so constant movement is recommended to avoid damage. Only up to six Flukefeys will chase the Knight at a time. One strategy is to have the Nail upgraded high enough to kill the Flukefeys in one hit, and then hit Flukemarm in between waves. Using Soul spells is also a good option as they allow the Knight to hit Flukemarm and its Flukefeys at the same time.

The most important thing to avoid in the fight is the water. Since the Knight cannot attack while swimming, they are completely vulnerable to attacks.

Defeating Flukemarm causes it to explode, dropping the Flukenest charm, which is actually one of its orifices. When equipped, the charm changes the Vengeful Spirit and Shade Soul spells into a horde of volatile flukes.

Flukemarm is a large gray fluke worm covered in orifices with pink openings and small tentacles. Because it itself is unable of movement, Flukemarm instead attaches itself to the ceiling of a cave with a clear substance. 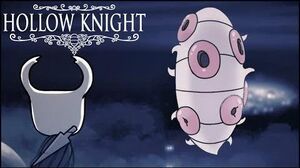 Retrieved from "https://villains.fandom.com/wiki/Flukemarm?oldid=3766235"
Community content is available under CC-BY-SA unless otherwise noted.