Be best friends with the person they kidnapped if they survived the night (video games; succeeded).

Flumpty Bumpty is the titular main antagonist of the One Night at Flumpty's fangame series.

He is an omniscient egg that is immune to the plot, can transcend time and space, existed before time itself and murders people because he feels like it. He kidnapped the player so he can be his new best friend. Flumpty doesn't have the best social skills, explaining his unusual methods of making friends.

Flumpty is also omnipotent and omnipresent as he is stated twice by Jonochrome to be all-powerful as well as being able to appear in any story ever if he wants to. His omnipresence is further explained in One Week at Flumpty's 3, where Flumpty says "I'm always there." Even Birthday Boy Blam agrees with this statement.

Before kidnapping the player, he also kidnapped twenty other people and using their corpses he made a monster called the Eyesaur. He has a mysterious golden counterpart called Golden Flumpty and a few pawns for his game that are either forced to do it or enjoy hunting the player as much as Flumpty goes.

He is voiced by series creator Jonochrome, who also created Diz from Riddle School, another series he made.

Flumpty somehow existed before time itself. He is aware he's fictional so he gained plot immunity and walks around killing people because he feels like it. It was written in "nondescript ancient stroll" that Flumpty once gave a speech about the importance of life and then shot a guy in the face for no reason.

At some point, Flumpty broke inside a man's house because he was cooking eggs. He was voluntarily arrested for breaking and entering only so he can escape prison. Later, Flumpty made a gang of various monsters and forces them to kill people. They are either forced into it or grew attached to the game and have as much fun as Flumpty himself. He killed twenty people during his "game", and using their corpses, he made a monster called the Eyesaur and made him join the gang. He also forced a man into drinking lava. The man lived (kinda), became the Redman and joined Flumpty's team.

The "office" of the games reveals that Flumpty went on a killing spree across dimensions and murdered many fictional characters, including Freddy Fazbear (all but Freddy have been turned into Riddle School characters in the ports due to copyright reasons). However, it's implied some of them are alive. Alongside this, he started shooting his gun while shouting "BANG BANG, Y'ALL".

Flumpty kidnapped the player because he felt like it and made them play his hide-and-seek game. He doesn't use his powers because he's holding back to make the experience fun. Unlike other characters, Flumpty doesn't have a path, and goes wherever he wants, but he'll always attack from the left door, and the player needs to close it to survive. Flumpty is expected to attack soon after the call ends. At 6 AM (or H AM in this game) the player wins the game.

The Beaver, a member of Flumpty's gang, fell into the toilet and died. Flumpty buried him and replaced him with the Owl.

One day before the events of One Night at Flumpty's 2, Flumpty killed approximately 100 billion birds with one stone, which happened to be a meteorite, causing the Apocalypse.

Flumpty kidnaps the player for the second time, and took him to a different location with different mechanics: No doors, and the only thing that can save the player is turning off the light. Once again, Flumpty goes wherever he wants, but will attack by appearing in the door before the player. He will give them one second to react, covering his eyes, before revealing them in a "peek-a-boo" way. The player needs to turn off the light so their exposure meter won't go up, leaving Flumpty or another character to kill them. The player wins the game and becomes Flumpty's new best friend.

One Week at Flumpty's (The Videos)

Although the game was cancelled, Jonochrome made three videos with the same name as the game, and released them on April Fools 2018, 2019 and 2020.

Flumpty welcomes Birthday Boy Blam to his house and asks if it's his birthday. After being asked why the house has no doors, Flumpty says that he ate them because he was hungry. Blam asks if Flumpty can use his powers to get them out of here, and Flumpty does so, forgetting to take Blam with him. He comes back one week later, saying he was at a strip club, but Blam died.

Flumpty says hi to Birthday Boy Blam and asks what he's eating. After Blam accidentally spills out that he was making eggs, Flumpty says that's rude, because it would be cannibalism if he did it. After a few seconds, Flumpty forces himself inside Blam's mouth, claiming that will help satiate his appetite.

After Birthday Boy Blam announces One Week at Flumpty's 3 is cancelled, Flumpty busts through the door, and asks Blam when is his birthday. After Blam says it must be today (April Fools) because he wears a party hat, Flumpty gives him a present, which is a DVD of Groundhog Day. Flumpty asks Blam why he doesn't grow up, and after Blam asks if this is a Good Egg/Bad Egg routine, Flumpty pulls out a knife and demands to know when his birthday is, before saying he was joking, as he was at Blam's birth, and will always be there. He then disappears for no reason.

Between the Games (Again)

The Owl chokes on an urinal and dies. Flumpty merges his and the Beaver's corpse together into the Beavowl.

Flumpty is first heard at the beginning of the Normal Night, through a phone call where he reveals that the player hasn't actually been progressing the night this whole time, and announces that if the player survives the night, they'll be set free. Flumpty is mysteriously absent throughout the entire night until 6 AM, where time itself reverses and Flumpty slaughters everyone else in the game, including Golden Flumpty. Thus starts the second night, aka "Flumpty Night", where Flumpty either replacing his friends with clones of himself or distorted reality to appear in multiple places at the same time. Some of his "clones" act like that of some characters from the previous games. He also takes over the second half of Hard-Boiled Mode in the same manner.

If the player completes Flumpty Night, Flumpty sets them free to an apocalyptic, Hell-like word. If the player completes Hard-Boiled Mode, then they are welcomed to a normal and happy world, and then see a picture of Flumpty ascending into the light. It's unknown what this means and if he's still alive, although what is known is that Hard-Boiled Mode is the true ending.

Before the games were created, Flumpty and Blam were webcomic characters, with Blam being the protagonist and Flumpty the tritagonist. In his first appearance, Flumpty saw people in holes before graves, and buried them, as he always wanted to do this. In his second appearance, Flumpty tries to find Cuppercake's sense of direction, but is stopped by another Flumpty. It's revealed to be Kevin Jr, Blam from the future, in a mecha. Flumpty brutally kills Kevin and destroys the mecha and continues his adventure. In the third and last appearance, Flumpty is hit by a nuke, but he was hard-boiled so he survived. He then finds Cuppercake's sense of direction and sets off to find Cuppercake.

One Night at Flumpty's 2 (Troll Game)

Before the actual game came out, Jonochrome made a short troll game. Flumpty calls the player and informs that this is totally the actual One Night at Flumpty's 2, and shortly afterwards pops out from the left door asking what's up. The player has to shoot Flumpty with their gun, and the egg dies. The same happens to Birthday Boy Blam and Grunkfuss the Clown afterwards.

One Week at Flumpty's (Cancelled Game)

Flumpty would be resting for the first four nights before becoming active at the fifth where he would have been the only threat, with the "office" becoming creepier.

On Night 6, it would have been revealed that Flumpty was the player character all along, and that the week was inside his head as a dream. The embodiment of all his crimes would have been Golden Flumpty, his inner demon. Flumpty defeats Golden Flumpty and travels back in time so everyone that he has hurt in his life could have their revenge on him. During this, he falls off a great height like Humpty Dumpty and dies. 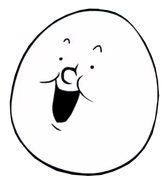