Repelling interlopers who trespass their turfs

Flybeemon are Armor level Digimon that looks like a combination of a human and several insects. They have they symbol of Knowledge on their head.

After IceDevimon was defeated, Rika and Renamon left each other. Renamon wanted to prove that she can beat Digimon without the help of a Tamer. Then three Flybeemon Bio-emerged and attacked Renamon. One of them was easily defeated. Another manage to hit Renamon. Eventually the final 2 were defeated and had their data loaded.

An Army of Flybeemon are members of the Bagra Army. They served one of the Death Generals; Zamielmon. They were uses to guard Zamielmon's Digihoney. They were killed by MetalGreymon. 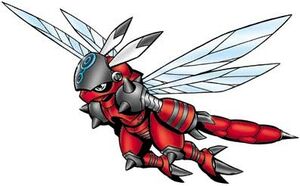 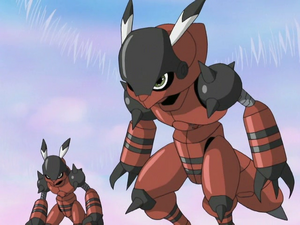 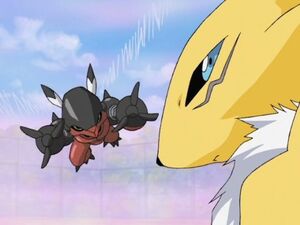 Retrieved from "https://villains.fandom.com/wiki/Flybeemon?oldid=2978282"
Community content is available under CC-BY-SA unless otherwise noted.