Kidnapping people and use it as part of his crew from the eternity or devour their victims.
Zapping those who disagree with him when it comes to a deal.

He is a powerful ghost who haunts the ocean, named after the legendary ghost ship of the same name. He is of enormous size compared to the other characters and captains a floating ghost ship with a green glow similar to his own, of which he appears to be the sole permanent crew member. He appears to be mainly interested in "scaring" undersea creatures rather than actually causing serious harm.

He is voiced by Brian Doyle-Murray.

The Flying Dutchman is shown to be cruel and sadistic. He enjoys terrorizing people for his own amusement. However, he also rewards people who help him, and keeps his promises. He also shows no tolerance for those he considers greedy/amoral as he harasses Mr. Krabs several times throughout the series because of his greed.

The Flying Dutchman is a ghost with a chartreuse green glow around him, yellow eyes with black irises, a scraggly beard, a pirate hat with a chunk taken out, a droopy nose, a coat, little pigtails, and a ghostly tail.

The Dutchman's exact nature and role are inconsistent between episodes. It can be inferred from his appearance that he is the undead spirit of a pirate, and one episode mentions that the reason he haunts the seven seas is because his corpse was used as a mannequin in a clothing store window and he was never put to rest. In another episode, he states that he has not worn laced shoes in 5,000 years, yet pirates did not exist that long ago. Other episodes suggest the Flying Dutchman is a Devil/Grim Reaper–like figure, primarily Born Again Krabs where he attempts to put Mr. Krabs in the undersea version of Hell, "Davy Jones's Locker", which turns out to literally be a locker cabinet belonging to a person named Davy Jones, and in a much later episode, it is revealed that the Davy Jones in question is in fact none other than the Monkees member of the same name. 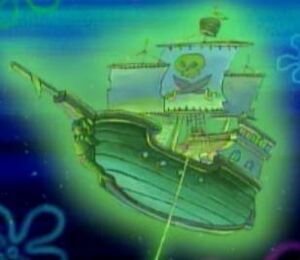 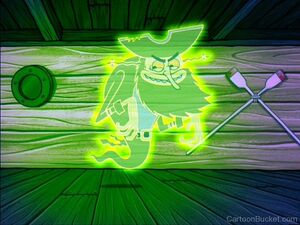 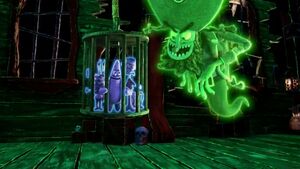 The Flying Dutchman in The Legend of Boo-Kini Bottom. 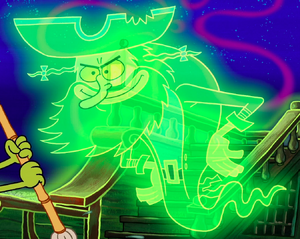 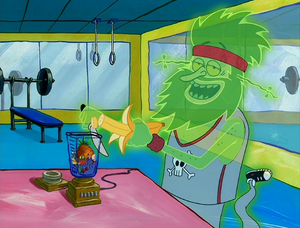