A criminal who with his cohorts has clashed several times with the Knothole Freedom Fighters and Chaotix, he has also worked under Sleuth Dog and Doctor Finitevus. He is the least serious out of them all as he intentionally scares people, act's like a clown, and is seen speaking in rhyme sometimes.

Flying Frog debuted as an agent of Mammoth Mogul's on his orders. He return to help Mogul in his bid to claim the Sword of Acorns by pitting the Chaotix and Freedom Fighters against each other.

Frog's purpose serving as the substance behind Mogul's illusions of Vector and Sonic, had the two groups fighting. When the more level-headed members of each team noticed the errors in these illusions, however, the scheme was blown and Frog was captured along with his teammates. However, the teammates were able to escape along with several characters.

Joining the assemblage of villains under Snively's leadership, Frog confronted the Freedom Fighters again in capturing Nate Morgan, a venture that proved much more successful than his previous encounters with the heroes. Sadly, his success was short-lived, as he and the rest of the future Destructix were defeated and captured by the Secret Service under the lead of Geoffery St. John. Following another escape from Devil's Gulag, Flying Frog and his teammates which now included Sleuth and Drago would take up residence in a factory that had once belonged to Dr. Eggman, keeping Tommy Turtle as a convenient punching bag. Later, Sonic would come to infiltrate that factory to liberate his old friend Tommy, only to watch as the Destructix, though they were not yet called that attempted to make a deal with Dr. Eggman to sell him the factory, which by rights he already owned.

Flying Frog engaged the Freedom Fighters and Chaotix yet again, but as usual was outclassed and outnumbered and so defeated. He and the others were taken to prison, only to be liberated when Mogul escaped from the Emerald himself. Frog fought against his Arachne as well as the arriving Freedom Fighters and Chaotix. When Mogul and Naugus joined forces, the battle continued between only two sides, but ended with the destruction of the Sword and Crown of Acorns and the capture of the villains by the Egg Fleet. Frog and his compatriots were teleported to the Egg Grape Chamber, where Mogul briefly protected them before lowering his shields and leaving them at Eggman's mercy.

Luckily for the criminals, Dr. Finitevus arrived with Scourge the Hedgehog and Rouge the Bat to liberate the Destructix. The doctor called them for their muscle, requiring Frog and his teammates to play the part of reformed mercenaries by defending helpless Echinda's of Angel Island from the Dingoes. Flying Frog and his compatriots revealed their true colors by ambushing and capturing Knuckles The Echidna when he returned to Angel Island and handing him over to the Dark Legion.

They were challenged by Sonic, Julie-Su, and Locke as they attempted to claim the device, only to be thwarted by Archimedes the Fire Ant and then have their mission rendered unnecessary by Sonic's destruction of the weapon. Flying Frog and his allies left through one of Finitevus' Warp Rings, having decided to become full-fledged mercenaries. The group soon found themselves once again employed by Mammoth Mogul. After a brief fight with Sonic, Sally, and fellow mercenaries Bark the Polarbear and Bean The Dynamite—whom Mogul had also hired but who had switched sides on Sally's offer of better payment—they captured Sonic and took him to Mogul's casino. They were all then defeated by Sonic, Sally, Amy Rose, and Geoffrey St. John, only for Rouge to pass the word to them that Mogul's plan all along had been to discredit Sonic by capturing him and then having him confront Mogul without evidence that Mogul had been involved. 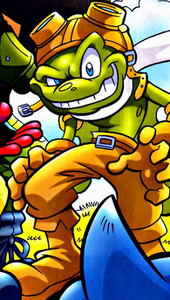