Villains Wiki
Register
Don't have an account?
Sign In
in: Mature, Serial Killers, On & Off,
and 20 more

Kill people to get Nick Lightbearer to write him a song (succeeded).

Few remember Jack's past, which is no surprise given the heavy use of Joy by the people of Wellington Wells.

Jack Worthing was the former lead actor of the Will Kemp Traveling Players prior to World War II. During the German occupation, Jack was the voice of the German Occupational Authority. He accompanied his daughter, Margaret, in her lead of the 1946 Battle of Flowers as Junior Field Commander. When the Germans took kids for the Authority, he attempted to hide Margaret, but Ollie ratted them out and she was shot for trying to escape. This made Jack turned insane and became the infamous serial killer known as "Foggy Jack" where he murders several people in Wellington Wells, but soon after that, he subsequently began taking Joy to forget about the traumatic incident and usually avoids anything that can remind him of her out of grief.

After the 'Victory' over the Germans, it is stated that Jack was arrested and later released to become the smiling face of the Wellington Wells entertainment shows known as "Uncle Jack".

In one final tape when Jack began talking about a woman making dolls, it reminded him of his daughter Margaret and how she used to make dolls, this makes him begin to cry as he starts to remember the past as he immediately tells his viewers that the foods ran out and that they need to stop taking their joy before finally snapping as he picks up a cricket and smashes anything in the broadcast. He then approaches the camera with an mad look on his face as he says the line he always says at the end of each episode "We've come to the end of our time" before smashing the camera.

He then ran away from the broadcasting tower and later returned to his Foggy Jack alter ego.

Foggy Jack plotted to make Nick Lightbearer write a song about him by murdering some people Nick came to contact (such as Virgil Dainty, Richard Bates and Kitty Bates). Nick Lightbearer comes into contact with Foggy Jack in person during what appears to be a drug-induced hallucinatory episode. Foggy Jack reveals that he has been killing off people to get Nick to write him a song. Nick, who is in danger of being framed for the murders, refuses to do so and Foggy Jack traps him in a maze. Foggy Jack threatens to wear his face to the Nick Lightbearer Lookalike Contest and will kill everybody when the lights go out. Nick manages to escape and engages in a one-on-one battle with Foggy Jack, which Nick had won. It is unknown if Jack was killed during the battle or simply knocked unconscious, nonetheless, he was taken by the police. 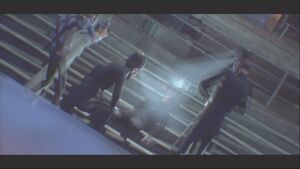