Kidnapping and mentally torturing his victims.

Retrieve the evidence that expose his dirty deed and erased it.

Senior Inspector Fok Tak-Nang is the main antagonist of a 2008 obscure Hong-Kong film Connected, itself a remake of the 2004 American film Cellular. He is the ringleader of the kidnapping of the Wong family (Grace, her daughter Tinker and her brother Roy) who is also a corrupt Interpol agent with a hidden agenda.

He was portrayed by Liu Ye.

Fok is a ruthless man and he is willing to do anything to get what he wants and tries to getting away with it such as kidnapping the innocent woman, Grace, who doesn't even interfere with his own affairs and tries to ruin said woman's life. He also display a sadistic streak by forcing her to watch when he callously kills some people like her maid. Fok also display some narcissistic behavior like he claims he did it for justice even if it was proven otherwise. Despite all of that, he and his men are able to outwit some unsuspecting people by telling them that they are a good cops even if they're trying to murder and Fok himself is a professional fighter given his job as an Interpol Agent and this was showcased when he gave Bob a No-Holds Barred Beatdown in the Airport Scaffolding.

Fok is a tall Chinese man (Standing in 1.86 m due to his portrayal's height in real life) who has white hair and is mostly dressed in black. He wears a black beret on his head and also a black jacket. Sometimes, he wore his own sunglasses but mostly he doesn't wear it.

Fok started the plot by knocking an innocent woman named Grace Wong and her vehicle unconscious with his car after she took her daughter, Tinker, to school. After they knocked her, they went to Grace's house, started ransacking the place and then Fok kills Grace's maid with a knife while Grace was forced to watch by one of Fok's minions just for the sake to mentally torture her. After this, Fok and his men kidnaps Grace into an abandoned house where he trapped her and then one of his men starts destroying the phone. Luckily however, Grace, being an architect was able to fix the phone and then calls for help. Unfortunately, instead of the police that she called. She called a humble debt-collector named Bob but even then, she asked him to save her by lending his phone to a near police officer.

However, the call soon went interrupted as Fok and his men entered the house and asked where her brother, Joe, is. When Grace answered that she didn't know about Roy's whereabouts. Fok and his men then abducts Roy's friend, Joe, and then forces Grace to call her own brother. If she refused, Fok’s men will proceed to beat Joe and then forces Grace to watch. When he asked Grace if she knew her brother's whereabouts. Grace replied that she didn’t know. Because of this, Fok kills Joe and then plans to abduct her daughter.

When Fok’s men successfully abducts Tinker after she came out from the school, Bob chases after the abductors but ended up losing their sight of them in the struggle. It was also revealed that Fok orders one of the Interpol agents, Michelle, to impersonate as Grace in which the latter tricks a low-ranking patrol officer, Fai. After meeting with the Michelle who still impersonating as Grace, Fai still thought that the entire kidnapping situation was a prank. After Fok returns to the abandoned house, He then threatens to kill Grace’s daughter if she doesn’t tell where Roy is and when she answers that she still didn’t know about her brother's whereabouts and said that he was probably at home due to something happening to him, Fok prepares to kill Grace. However, he was interrupted by Michelle and got a message that Roy was fell down from the hill and ended up in hospital. Fok then prepares to abduct him.

When Fok and his men went to hospital, Bob then manages to distract them by throwing his gun which proved to be unsuccessful since Fok and his men were revealed to be an Interpol Agents and then tricks the unsuspecting people in the hospital he and his men are a good cop. Not only that, he also succeeded in kidnapping Roy and took him to the hill so that Fok could retrieve Roy’s camcorder. When Fok and his men manages to grab Roy’s backpack, Bob intervenes and took Roy’s backpack and then flees from the Interpol agents. Unfortunately, he loses the connection with Grace.

As Grace tries to contact Bob, she is encountered by one of Fok’s henchman. However, she kills him and manages to find her daughter. Unfortunately, they got caught by Fok. When Bob tries to look at Roy’s backpack, he founds a camcorder and then Bob looks on one of the footage. In there, Bob founds the reason why Fok has been kidnapping Grace,Roy and Tinker all along. It was revealed in the footage that was taken by Roy that Fok and his men brutally executing American Drug dealers and stealing their contraband. And because of this, Fok then tries to capture Roy and got rid of the evidence but when he failed to found Roy, Fok sets his eyes on his sister anyway. When Fok finds out about Grace talking to Bob in the phone and then becomes angered after founding him interfering with his own business, Fok then threatens to kill the thing that Grace loves, her daughter and her brother, and then tries to shoot Roy and Tinker in a cold blood while forcing Grace to watch. Fortunately he got interrupted due to the call from Bob. Bob tells Fok that they need to meet him in the airport in an exchange for the hostages.

At the airport, Bob’s plan to met with his sister and his son are foiled as Fok conveniently stands between them and Bob's hiding place. After telling Fok to go towards the parking lot, he demands that Grace, Roy and Tinker be released. They flee to a patrol car that is also in the lot. Unfortunately, Bob is caught by Fok and his men, and fights against them until Fai catches up to them. Fok and his men are arrested by Detective Cheung and his Serious Crimes Unit. After Bob hands the videotaped evidence over to Detective Cheung, Fok and Tong, one of Fok's henchman, appear, and Cheung reveals that he was working with Fok. Fok then deletes the evidence and then prepares to kill Bob like a game of Russian Roulette. A violent confrontation ensues in a loading dock in the airport and Bob confronts Fok in a scaffolding which the latter gave a No Holds Barred Beatdown to Bob and prepares to kill him. After Bob reveals he still has videotaped evidence on his cell phone and threatens to send it to the police, Fok kicks Bob off the scaffolding. A net manages to save Bob's fall, but sends Fok falling to his death. Killing him for good. 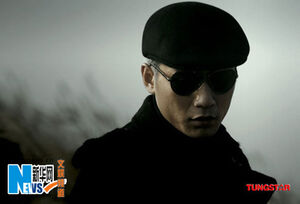 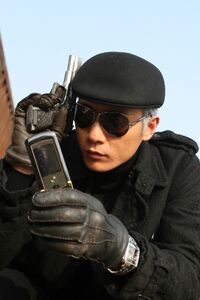 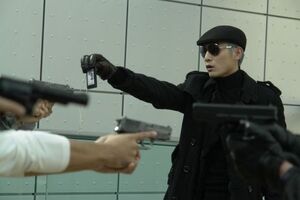 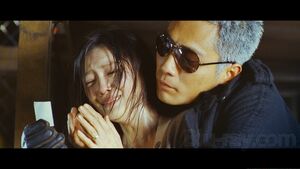 Fok and his hostage Grace. 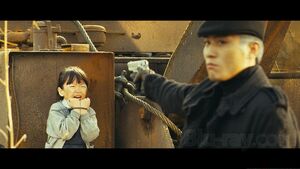 Fok tries to murder a child.