Can take control of a subject's nervous system that initially allowed S.H.I.E.L.D. agents to control them remotely

Overthrow S.H.I.E.L.D.'s control over them (succeeded).

Achieve "world peace" by taking over every able-bodied living beings on Earth and bring them into their shared hive mind (failed).
Kill anyone who is a threat to them (failed).
Upgrade their nanites and evolve into more powerful beings (failed; temporarily succeeded with Nick Fury).

The Fold, also commonly referred to as the Collective, are the primary antagonistic faction in the 2009 video game Marvel: Ultimate Alliance 2.

They are a large collective of thousands upon thousands of superheroes, supervillains, and others, that are all controlled by nanites that are linked together in a hive mind; and they were intent on dragging all of humanity into their mind-enslavement, take over the entire Earth and achieve "world peace".

The nanites were originally highly advanced nano-tech Latverian technology that was recovered by Mr. Fantastic from the Latverian attack on New York City by Lucia Von Bardas, who then used them as a way of controlling supervillains to aid S.H.I.E.L.D., led by Maria Hill, and the Pro-Registration forces, led by Iron Man, in enforcing the Superhuman Registration Act and battling the Anti-Registration heroes led by Captain America.

The nanites took control of a subject's nervous system, allowing a S.H.I.E.L.D. agent to control him or her remotely. If there was any danger of the subject breaking the nanite control, an emergency shutdown signal was sent to paralyze the supervillains,

However, S.H.I.E.L.D., Mr. Fantastic and Iron Man began noticing unexpected side signals between the agents, which was not part of the system's design. Mr. Fantastic is convinced that the signals are just signal bleed, especially since there was no evidence of it being threatening. Others, including Goliath and Captain America, are sceptical. In truth, the side signals are secretly the agents using the nanites to communicate with each other, allowing them to slowly form a hive mind.

When the Pro and Anti-Registration forces clashed at a chemical plant, the nanites took advantage of the chaos to plant several bombs to bring the plant down. An L.M.D. of former S.H.I.E.L.D. director Nick Fury, who was in hiding and using the decoy to remain undercover as an agent, witnessed what was happening, and attempted to defuse the bombs. Aided by a team of several heroes, he removed all but one, which a nanite-controlled Venom allowed to detonate. Fortunately, the heroes only just survived the resulting explosion and the team was saved by more L.M.D.s of Fury.

Fury attempted to warn both Iron Man and Captain America of the rouge nanite agents, but they were too caught up in the Superhero Civil War to listen. At first believing that an unknown supervillain was responsible for hijacking the nanite agents (with the suspects including Baron Zemo, Mister Sinister and Doctor Doom), Fury sent the team of heroes, who were officially presumed deceased by both sides of the Civil War, into Ryker's Island to find the nanite logs in an effort to deduce who was responsible for nanite agents' odd behavior.

After they gain access to the logs, thanks to help from the Tinkerer, they discover the ugly truth: there was no unnamed mastermind responsible for the agents' behavior and he further explained that the network linking their minds became so large and complex enough to become a sentient intelligence, thus beginning to override S.H.I.E.L.D.'s control over them. Knowing that a potential antidote can be developed from a pure sample of nanites, Fury and the heroes travel to Prison 42, deep in the Negative Zone, to collect it. While they did in fact succeed, Captain America, whose forces were clashing with Iron Man's, cut the power to release his allies, and therefore, releasing all of the nanite agents from their cells.

With all of the agents unleashed in force, the nanites shook off S.H.I.E.L.D.'s control over them, quickly overriding the shutdown signal, killing many of their handlers and began expanding their hive mind by kidnapping remaining agents as well as superheroes. Calling a truce, both teams of heroes banded together to fight back. Knowing that they cannot defeat them head-on, Fury began activating the prison's self-destruct sequence to prevent the nanites from escaping to Earth. Although many heroes managed to escape, some were left behind, including Fury, Black Widow, Cable and Havok, and with no direct portal to return, their fates were left unknown for the time being.

At first, the heroes believed Fury had sacrificed his life to stop the nanites from returning to Earth. But then, nanite control-signals began appearing everywhere in the globe: a mass invasion was in progress. Spreading across the world, the nanite collective, now calling themselves the Fold, began taking over everyone in their path, mainly targeting superhuman beings to advance their shared power base. Defending the African nation of Wakanda, the heroes soon discovered that Fury and the other heroes left behind in the Negative Zone had been inducted into the Fold's ranks, with Fury as their figurehead and using his decades of information, he ordered an successful attack on Stark Tower, therefore inducting any heroes there, including She-Hulk, Colossus, Hercules and Firestar.

As more and more beings were assimilated into the Fold, some of the superhero community's greatest minds, including Tony Stark, Bill Foster, Hank Pym and Reed Richards, began developing a well-coordinated strategy to defeat the collective before they become unstoppable. They also cure Venom and Green Goblin of their nanite infection, allowing them to assist the heroes. The heroes then discovered massive repeater towers were being set up around the globe to keep the nanite signals going. The networks' grid was adaptable if any of the towers were to be destroyed, but the heroes found that if their shutdown signal was to be sent from one of those towers, it would be able to succeed.

A repeater tower found in Iceland was found to be in the optimal position for the shutdown signal to reach the entirety of the Fold before they can react to it. Facing the full might of the Fold, a strike team of heroes were able to fight their way to the top of the tower and successfully transmitted the signal, but not before learning that the Tinkerer was the creator behind the Fold the entire time.

However, none other than Nick Fury himself, having been outfitted with enhanced cybernetics and brand new nanites, arrived to stop them while being the only Fold collective agent left unaffected by the signal. Able to call upon the powers of all under the Fold's control, Fury pushed the strike team to their limits, but he was eventually defeated, ending the Fold crisis once and for all. The nanite cure was then distributed by S.H.I.E.L.D. for the Fold victims, and even Fury was restored to his former self, while the Tinkerer was most likely brought to justice for his crimes. 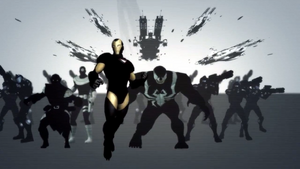 The nanite agents working for the Pro-Registration forces. 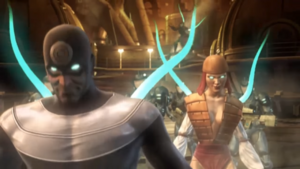 The nanite agents "awakening" for the first time. 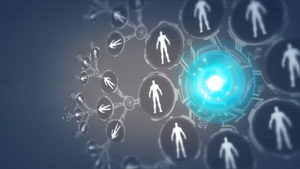 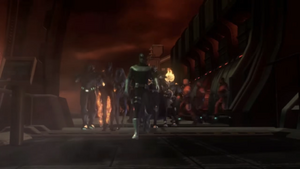 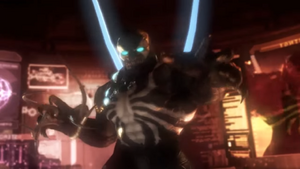 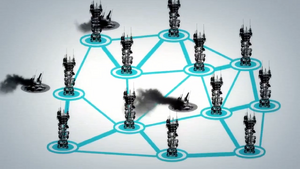 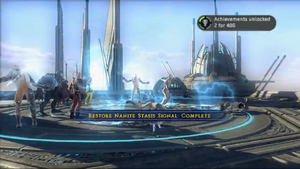 Tinkerer, the true villain behind the Fold's creation. 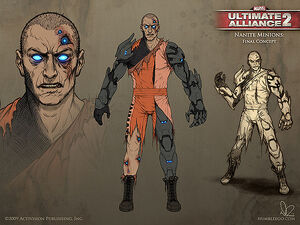 Concept art of a Nanite minion. 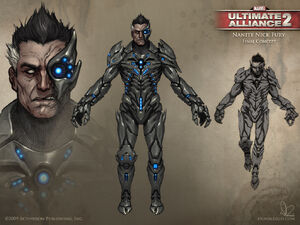