Many tragic people and their comatose loved ones

The Followers of Thanademos are a magic cult comprised of people who have tragically lost their loved ones and they followed the will of Abbot Thanademos.

These men and women were loyal to Thanademos because he wanted to revive their loved ones from comas for them with magic as he uses the Tome of Uncoma which is the means to restore lost souls back to life and to draw in new and potential, faithful followers. They did not care that he would control their loved ones for his own purposes and helped him to get the comatose loved ones to the abandoned St. Mark's Church which serves as the cult's established compound.

The disciples fought him together with their resurrected loved ones, but they had no chance against Iron Fist's kicks and punches and even failed to secure the escape of their precious leader. After the battle was over, most of the cult's very own zealots were later quickly under arrest along with Abbot Thanademos while some cult members chose to reject him and move on with their lives, and the Tome of Uncoma was never seen nor heard from again. 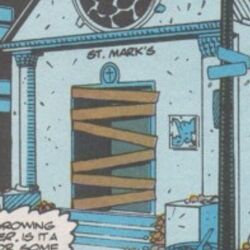 Tome of Uncoma
Add a photo to this gallery
Retrieved from "https://villains.fandom.com/wiki/Followers_of_Thanademos?oldid=3224784"
Community content is available under CC-BY-SA unless otherwise noted.