Dominate Ireland and destroy those who gets into their way.

Fomorians are a race of semi-divine beings from Irish mythology.

Fomorians are said to be one of earliest inhabitants of Ireland, the other being the people of Cessair, the people of Partholon, and the people of Nemed. However, only latter two who have recorded encounters with this race. According to Geoffrey Keating, Fomorians, led by Cichol Gricenchos, settled at Ireland 200 years prior to the arrival of the people of Partholon and overthrown them only to be killed by a plague. Fomorian survivors then encountered the next foreigners, the people of Nemed, sparking another conflict where Fomorians faced another loss where Nemed killed their kings Gann and Sengann. Both Gann and Sengann would later be avenged by their people's new leaders; Conand son of Faebar and Morc son of Dela.

Following Nemed's death, Conand and Morc enslaved his people and demanded a heavy tribute: two thirds of their children, grain, and cattle. This sparked another conflict where Fergus Lethderg, Nemed's son, gathered an army of 60,000 to combat Fomorians and destroyed Conand's Tower. Yet the war ended in stalemate with Morc arrived with a huge fleet, resulting the great slaughter on both sides: Only thirty of Nemedians (Nemed's people) escaped in a single ship scattered to the other parts of the world.

Afterwards, Fir Bolg, descendants of Nemeds, settled at Ireland and made the land their new home, but none of them encounter Fomorians like their predecessors did because the latter were forced into hiding in the light of the battle against Nemedians. Some Fomorians even intermingled with other races to restore their population, including their rival race Tuatha Dé Danann.

Fomorians soon made their return after Tuatha Dé Danann overthrown Fir Bolg in the first Battle of Mag Tuired and subsequently took over a large part of Ireland. Upon learning that the former's leader Nuada lost an arm in battle and no longer eligible to be the king of his people for being no longer physically whole even after his missing arm has been replaced with a silver one in courtesy of Dian Cecht, Fomorians appointed Bres, a half-Fomorian, half-Tuatha Dé Danann to become the puppet leader of Tuatha Dé Danann. As before, through Bres, Fomorians enslaved Tuatha Dé Danann as they did to Nemedians in the past for seven years. History soon repeated once again, with Tuatha Dé Danann revolted against Bres and sparked another war. Around this time, Nuada, whose missing arm restored by Miach against his father Dian Cecht's wishes, made his return and led his people once again with the heroic half-Fomorian Lugh joining his cause just as Bres amassed an army of Fomorians alongside the warlord Balor the Evil Eye.

In the heat of the battle between Tuatha Dé Danann and their rival Fomorians, a battle which remembered as the second Battle of Mag Tuired, Balor, the commander of Fomorians, came face to face with Nuada and killed him in an epic struggle. Balor in turn however, defeated by Lugh as prophesied – when Balor unleashed the power of his destructive evil eye, Lugh used this opportunity to drove the said eye out the back of his skull with a mighty shot of his sling-shot, killing the Fomorian warlord and causing the turning his eye's dark powers against his own army, decimating most of them and forcing the survivors to retreat. In the middle of the chaos, Bres was captured and spared under the condition where he teach Tuatha Dé Danann how to plough, sow, and reap, introducing the agriculture to Ireland for real. Lugh, Dagda, and Ogma then rescue Dagda's haro, Uaitne, which had been captured by the retreating Fomorians.

Having reduced into shadow of their former selves once again, Fomorians were forced to flee into the ocean, no longer posing the threat to the Ireland.

Fomorians's physical description is obscure at best. They originally regarded as malevolent spirits dwelling underwater and in the nether regions of the earth, yet later portrayals depicted them as sea raiders. Apparently later depiction was influenced by the Viking raids on Ireland that were taking place around that time, which so frequent that the meaning of this name became forgotten in the light of confusion between mortal raiders and these transcendent entities.

According to Lebor na hUidre (the Book of the Dun Cow), they are sometimes said to have either the body of man and the head of a goat or possessing humanoid form but with one eye, one arm, and one leg. Some Fomorians however, such as Elatha, Bres' father, stated to have beautiful appearance and Bres himself carries the epithet "the Beautiful". Geoffrey Keating's accounts about Fomorians in his History of Ireland stated that they are descendants of inhabitants of Canaan who forced to abandon their homeland and to the sea after being changed by Noah's curse and to avoid unwinnable war with the sons of Shem.

Nowadays, Fomorians commonly depicted as giant-like beings on the same vein with Jötnar from Norse Mythology. Both races even labelled as analogous to trolls, giants, or even ogres in popular culture as much as the latter, at times overlooking the fact of them in truth transcendent entities representing harmful or destructive aspects of nature in the process. Other similarities with Jötnar are their notorious reputation and complex relationships with their rival race where in Fomorians' case, Tuatha Dé Danann; Fomorians made enemies with both Nemedians and Tuatha Dé Danann with the latter race being most tenacious through their oppressive and brutal ways, yet they harbor good people where some of them even married with a Tuatha Dé Danann leading to the birth of half-Fomorian, half-Tuatha Dé Danann children with Lugh being one of them.

As a semi-divine race, Fomorians are endowed with great mystical power and physiology. On the same vein with mortal giants and trolls, they possess enhanced strength, endurance, durability, heightened healing factor, and enhanced senses albeit at sufficient degree to match those of Tuatha Dé Danann. If the accounts of them originating from the sea were to be believed, Fomorians also sported certain physiological features that enable them to adapt to underwater environments, perhaps in form of gills or webbed fingers accommodate enhanced swimming. They can also wield nature-based magic which, true to aforementioned aspects they represent, leaned to darker and destructive sides of nature itself.

As with well-known figures of Celtic Mythology, Fomorians have been described in many films, comics, videogames, and books, more than often depicted to resemble storybook giants, trolls, and/or ogres despite the fact that traditional lore and myths clarified them as divine beins.

In Dungeons and Dragons franchise, Fomorians are a race of giant-kin hideously deformed by an ancient curse.

In BloodForge, Fomorians appear as a brutish humanoid with conical helmet that pointed upwards with the largest of the kin, Balor, serves as one of the bosses.

The supernatural humanoid goat known only as The Author for being the one who wrote Émigré Manuscript, a book with the power to manipulate death and time and a prime sorce of chaos in Koudelka and the Shadow Hearts games, is a member of Fomorian.

Fomorians appear as one of races in the Japanese web novel Re:Monster written by Kanekiru Kogitsune. Here, they appear as primitive yet strongest species in Fomor Mountain, appearing as half-man, half-goat like brutes.

In 2007 action role-playing video game Folklore, Fomorians under the appear as one of Folks whose Id can be absorbed by protagonists in order to conjure a copy of them for attacking.

In The Waylanders, Fomorians appear as cyclops-like humanoid, supernatural creatures. Once honorable race who content with their exile following Tuathas' rise of power, majorities of them ended up reduced into savages due humans began hunting and killing Fomorians as a display of heroism, equating them not to people, but to common monsters due to their fearsome appearance and ability to regenerate. Worse still, their king resorted to have his own people feed on portions of his flesh to subsist, a perverse practice that has caused the Mourians to look down on them with disdain, and treat them as second-class citizens. Even so, Half-Fomorians fare better than their purebreed kin in other races' eyes and more than often sought by military and mercenary groups into their ranks.

Balor, the Fomorian warlord infamous for his Evil Eye power 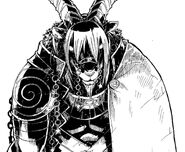 A profile of Fomorian race in Re:Monster 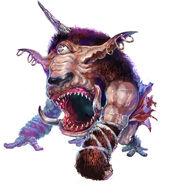 Artwork of a Fomorian in 2007 game Folklore