Prime Minister of the Zanscare Empire

Leader of the Gattle Party
President of the Jupiter Republic Alliance

Ordering the construction of superweapons.

Executing officers who fail him and dissidents against his empire.

Use the Angel Halo to wipe out Earth's population so the Zanscare can move in and conquer it.

Create a world without free will ruled by him.

Fonse is the elderly Prime Minister of the Zanscare Empire and its de facto ruler. While Maria Pia Armonia nominally holds power in the empire, it is Fonse who is the real power behind the throne, using Maria as a figurehead for his own agenda. A cruel and heartless man, Fonse's ultimate goal is to wipe out all the humans living on Earth so the Zanscares and his political party from Jupiter can move in and claim the planet for themselves.

He was voiced by Kaneomi Oya.

Hailing from the Jupiter Sphere, Fonse Kagatie came across a pacifist cult in Side 2 led by Maria Pia Armonia, whose powerful Newtype abilities had attracted a strong following to her. As Maria's followers grew widespread in number, Fonse, having infiltrated the cult as an advisor, began urging them to take more radical action against the corrupt Earth regional governance that had been installed in Side 2. Eventually, with Fonse's backing Maria's supporters overthrew the Earth politicians in Side 2, allowing Fonse to take power in the vacuum and to use Side 2 to form the basis for a theocratic empire. Soon, the Zanscare Empire was born out of Side 2, with Fonse plotting to use them to conquer the entire Earth Sphere.

Fonse ordered the construction of a superweapon designated the "Keilas Guilie", a powerful satellite with which the Zanscare Empire could use to carry out orbital attacks against the Earth. However, the satellite never had the chance to be used against its intended target as soon after it was finished it was captured by the League Militaire forces and turned against the Zanscare fleet.

Angry at the loss of the satellite as well as its defense fleet, Fonse ordered the one in charge of supervising its construction, Tassilo Vago, to be executed for his failure. However, as Tassilo was prepared to be executed alongside League Militaire pilots Uso Ewin and Odelo Henrik, he was given a chance to escape when League Militaire forces showed up to rescue the latter two.

Fonse eventually initiated construction of his ultimate superweapon, the Angel Halo, a psycommu fortress that gathered the power of hundreds of psychics all controlled by a single powerful Newtype in the center and used it to render its targets' minds' infantile. Fonse planned to use the superweapon on the entire human population of Earth to kill them off so he and the rest of his Jupiter backers could move in. Once the Angel Halo was complete, Fonse gathered together several thousand of Maria's Newtype followers and persuaded them to become power amplifiers for the Angel Halo, claiming it was a device for broadcasting messages of peace and good will to put an end to the bloody war rather than orchestrate a total planetary genocide. Fonse originally intended to use Maria herself as the Angel Halo's power source, but complications arose when Tassilo Vago, angry at Fonse for attempted to have him executed earlier, betrayed him and kidnapped Maria. However, Fonse soon gained an alternative in the form of Maria's 11 year old daughter Shakhti Kareen, whom he was able to convince to take Maria's place as the Angel Halo's power source.

However, during a final assault by the League Militaire to take out the Halo, Uso Ewin, pilot of the Victory Gundam, was able to infiltrate the Halo and trigger an explosion from its inside. As the Angel Halo is destroyed and his plans fall apart, Fonse is left shooting and ranting at a Newtype-induced hallucination of Maria Pia Armonia before being killed by a fragment of the collapsing Angel Halo. 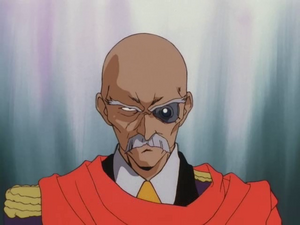