Create "workers" for plantations and factories that would never die and would work for free (formerly) .

Commander Maria Eleanor Raquel Fontana is the secondary antagonist in Dead Rising 4 and the commander of Obscuris organization.

She was voiced by Carmen Sisco.

She is head of the private military organization called Obscuris based in Willamette, Colorado that was cloning humans to aid in finishing Dr. Barnaby's research on immortality. After a while, they changed their mission into capturing and training zombies. The plan was to create workers for plantations and factories that would never die and would work for free.

She is a strict and no-nonsense woman who can be very impatient when it comes to producing results. She clearly cares about her fellow comrades however, being unwilling to put them in unnecessary risk.

An expert in hand-to hand combat and marksmanship, she is a formidable opponent to anyone who crosses her.

Fontana is first introduced when Dr. Blackburne attempts to show her an improving but inadequate specimen in their research. Fontana harshly questions why she is looking at a useless specimen. Dr. Blackburne says that what their client is expecting will require a lifetime of research, but Fontana simply informs her that if she can't meet the deadline, she will be replaced before ordering Blackburne to put the specimen with the other failures.

After she notices a ZDC helicopter flying into the now zombie infested Willamette at the start of Case 1, she orders her Lieutenant to shoot it down with a rocket. Afterwards, Fontana orders him to take care of any survivors of the crash by any means necessary.

Fontana later meets with Vick Chu in one of Obscuris's makeshift base of operations in Case 2. Vick tells her that she knows Fontana's soldiers were attacked by an armed group that killed two of her men. Fontana quickly says that one was a man and the other was a woman, and that both were decade long friends. Vick informs her that she knows where her attackers will hit Obscuris next, where they are going, the name of their leader, and where they hide their food. Vick informs Fontana that with information like that, a lot of unnecessary death can be avoided. Fontana considers her options for a moment before asking Vick what it is she wants. Vick states that she wants only thirty minutes off the record to ask Fontana some questions. Before Fontana can answer, an Obscuris soldier brings out Darcy, who was caught snooping around on Obscuris's computers. Her Lieutenant draws his gun and puts it to Darcy's head, awaiting Fontana's orders. Fontana, because of Vick's presence, orders that Darcy be bathed and fed. Fontana tells Vick that she can ask her questions and has her Lieutenant drive Vick back to the base. Fontana then brings her attention to Frank West , who was watching the entire conversation, something Fontana was aware of, and tells him it's a shame he's not as useful as Vick before ordering her soldiers to kill him.

When Frank is forced to break into the Obscuris base in order to take video footage Obscuris stole from Barnaby's lab, Calder takes advantage of the situation and has a large zombie horde attack the base as well. It is presumed that Fontana was fighting and leading her men in order to defeat the zombies. Eventually, Fontana finds out that Frank managed to sneak into Obscuris' intelligence lockup and quickly shuts off the power to stop Frank from discovering any of their secrets. She is too late, as Frank had just found what he was looking for. Frank tries to escape the base, but Fontana catches up to him and kicks him down a flight of stairs. As he recovers from his fall, Frank tells Fontana that he knows that Obscuris was researching an immortality treatment and selling it to the highest bidder. Fontana explains that that was the original plan before they discovered the evolved zombies. After that happened the mission changed into "pacifying, domesticating, and training" the evos. Frank asks if Obscuris was planning on making zombie soldiers, but Fontana denies, calling that idea insane as zombies are too unstable to be entrusted with firearms. She explains that their new mission was making these zombies safe enough to be exploited as a cheap labor force sold to whoever wants to buy some. Fontana regretfully states it's all about money to "these guys." Frank asks who "these guys" are, causing Fontana to say people just like him, assuming of course that Frank pays his taxes. Fontana then engages Frank in combat.

Her fight with Frank only leaves both of them a little bruised. Right as they are about to fight again, Calder breaks into the room. Fontana and Frank quickly hide. Fontana receives a question on her radio asking if she needs assistance, but Fonana, knowing that Calder would just kill her men, orders her soldiers to not come to her position. Calder, having heard her brief orders to her men, finally notices and attacks her. Fontana pulls out a grenade and lunges at Calder, attempting to sacrifice her life to kill him. However Calder catches her just before the grenade explodes. Fontana loses her arm and begins to suffer extreme blood loss from the blast while Calder, unfortunately, is hardly fased. Calder becomes distracted by Obscuris gunfire outside and rushes to kill them. Frank takes his chance to escape, but not before telling Fontana that her attempt at a self-sacrifice was noble. Fontana simply states that wolves take care of their packs before bleeding to death. 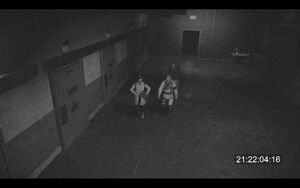 Fontana, James Caballero and Dr. Blackburne in a security feed during Case 0. 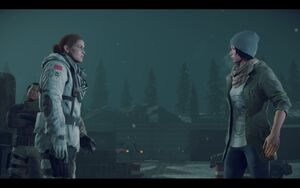 Fontana and Vick during Case 2. 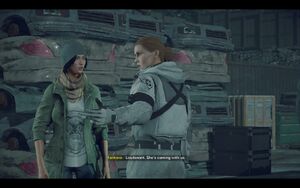 Fonata makes a deal with Vick. 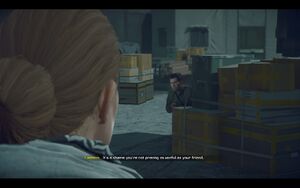 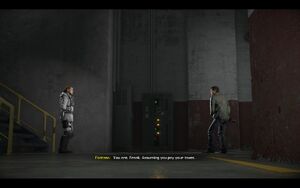 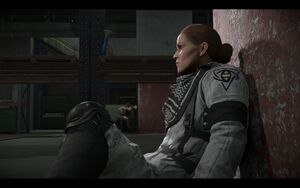 Fontana and Frank hide from Calder. 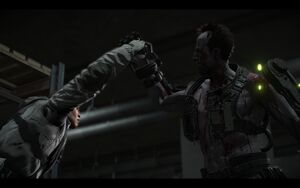 Fontana tries to blow up Calder. 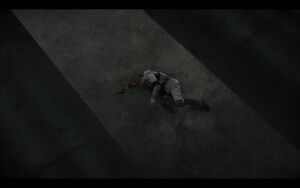 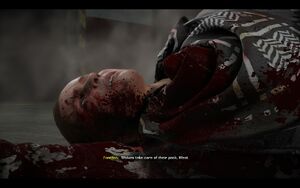