Note: This page only details the villainous exploits of Foo Fighters. For a more complete look at them and their more heroic actions, view their page on the Heroes Wiki.

Foo Fighters, also known simply as F.F., is a minor antagonist turned major protagonist in JoJo's Bizarre Adventure: Stone Ocean. A group of plankton that has assembled itself into a humanoid shape by Enrico Pucci's meddling with the Stand Discs, it originally works for the priests to protect said discs before siding with the heroes.

Originally, Enrico Pucci kept his Stand Discs in a storage warehouse nearby Green Dolphin Street Prison, but as the area around the barn grew wild and unclaimed, he sought someone or something to guard these Discs to keep them under his protection. Tossing a random Disc into the ocean, this Disc later collided with a group of plankton, and through this method, a new species was born, being the colony that compiles Foo Fighters. Told by Pucci's Whitesnake to stand watch over these discs and use lethal force against attackers, they originally stood over his collection with blind obedience.

An unknown time later, Foo Fighters killed two astray inmates and devoured their corpses, resulting in the staff of the Green Dolphin Street Prison summoning a search party to find them, this group including Jolyne Kujo/Cujoh and Ermes Costello. Splitting itself to possess the bodies of three of the other members of this group, Foo Fighters also kills an unfortunate guard and lures Ermes into the water with a well-timed bucket hit. Formingly fully, Foo Fighters attacks the heroes underwater before both women stun it and escape.

After a brief exchange where Jolyne and Ermes accuse the other members of the search party to be secretly Foo Fighters, the beast emerges from the three living women's bodies, reveals its plan to kill any who go near Pucci's collection, and both forms of it enact their plan (The main body making a mad dash towards the warehouse, while the sub-body plans to drag the dead guard into the water more to activate the Like a Virgin's explosive charges.

As Jolyne rushes to the storage barn, Ermes takes on the sub-body of the creature. Although the sub-body manages to cause Ermes to have a gash across her arm and get on land through splashing the area around it with water, Ermes tosses one of the search party member's corpses at it, causing its low hydration and dust to finish off the sub-body. After this, Jolyne takes on the main Foo Fighters in the warehouse. Covering the floor with water, Foo Fighters spreads its plankton throughout the area and almost possesses Jolyne, but Jolyne manages to distract it by starting the tractor the Stand Discs are in. Weakened by having to cross dry land to get to the moving vehicle, Jolyne decides herself to spare Foo Fighters' life under rational that Foo Fighters only did what it did out of mindless following and a will to survive. Through this mercy, Foo Fighters becomes an ally of the heroes, using the body of the dead Atroe as its physical form.

As basic plankton, Foo Fighters has a long grey crest, large eyes, teeth, a grey body short limbs, and a tail. In their default "Stand" form, Foo Fighters has a mainly black body with yellow and white highlights with a long head, a skinny frame, three sharp teeth, mechanical-looking joints, humanoid hands, and a hoof-esqe foot. Their sub-body is of a similar design, but with it having only yellow markings on the chest and a face more like their plankton form. However, Foo Fighters tends to prefer to take the form of other people, with its more common body being the body of Atroe. Near the end of JoJo's Bizarre Adventure: Stone Ocean, the two forms eventually look near identical due to her developed identity, causing Foo Fighters to have a appearance similar to Atroe but with Foo Fighters' coloration and mechanical pieces near the end of the part.

Originally, Foo Fighters was a humble servant of Enrico Pucci, with a strong desire to protect his collection. Intellect yet inexperienced, Foo Fighters ruthlessly guards the Discs, and is ready to possess and kill those who threaten its goals. Following its redemption, however, Foo Fighters proved itself to be a curious, selfless, and valuable ally. Regardless of version, Foo Fighters takes great pride in its sentience and intellect, and due to it giving it life, is always willing to drink water or any other liquid to live on.

Being a mixture of both a animalistic Stand User and Stand, Foo Fighters lacks a need for a particular user to control it, and is able to control itself through its colony of plankton. This body of plankton also allows it to fight physically itself (This strength being about on par with Jolyne's), have a extreme durability (Being able to take and regenerate from near-lethal wounds to the colony with relative ease), produce separate bodies of itself to independently attack targets, possess other things with its plankton, fire plankton out as if from a firearm, and patch up wounds. Foo Fighters also has a mild hydrokinetic ability, being able to create a mirror out of water. That said, Foo Fighters needs to stay hydrated to stay alive, and any blow to the entire colony will easily and severely damage it. 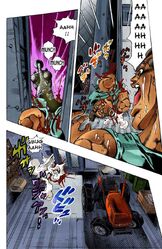 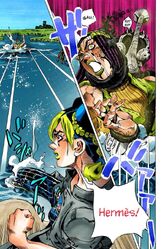 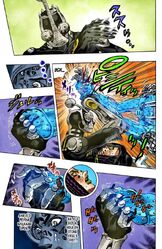 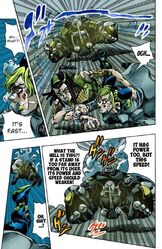 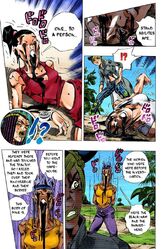 Foo Fighters revealing its possession of the other members of the search party. 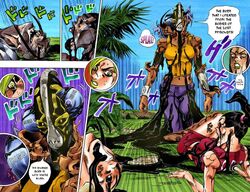 Foo Fighters emerging from the bodies of the dead women. 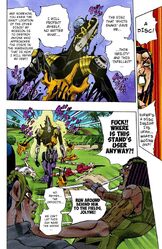 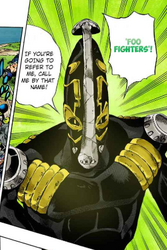 Foo Fighters revealing its name to Jolyne and Ermes. 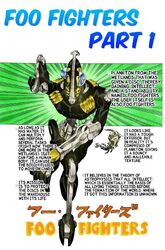 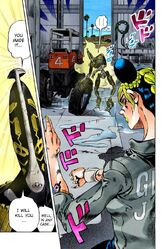 Foo Fighters in the warehouse. 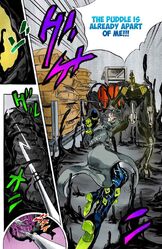 Foo Fighters spreading itself throughout the wet warehouse floor. 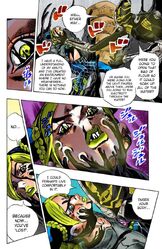 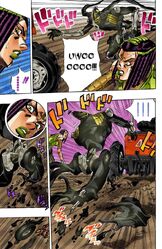 Foo Fighters weakening itself by dashing across the soil. 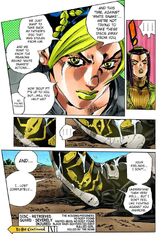 Foo Fighters' redemption.
Add a photo to this gallery

Retrieved from "https://villains.fandom.com/wiki/Foo_Fighters?oldid=4283786"
Community content is available under CC-BY-SA unless otherwise noted.