Boss of the Katana Gang

Fujiyama is one of the two main antagonists (alongside Yamashita) in the 1991 cult classic film Samurai Cop.

He is the ruthless leader of the Katana Gang, and seeks to take control of the Los Angeles underworld. When Joe Marshall begins an investigation on the drug trade, he sends his minions to take down the cop.

He was portrayed by Cranston Komuro.

Fujiyama first appears in the introduction scene, where he ordered the assassination of a rival crime boss, coming to the attention of Joe Marshall and Frank Washington. Following a car chase between the cops and a couple of the Katana Gang members, Fujiyama orders the one who survived (albeit suffering heavy burns) beheaded for failure and his head placed on his piano to remind all other Katana members of their code of silence.  Joe and Frank then confront Fujiyama and the Katana at Carlos'n'Charlie's Restaurant in an attempt to reproach him, but fails, leading to a fight in the parking lot. He then orders Yamashita to kill all the men who failed to subdue Joe and Frank to maintain the code of silence. When confronted by Joe, Fujiyama aims a pistol at his former girlfriend Jennifer (who Joe recently seduced), so that if he falls he will shoot her as the last laugh. He then shoots Frank in the chest, who is revealed to be wearing a bulletproof jacket and kills Fujiyama.

Fujiyama meets with other members of the Katana Gang 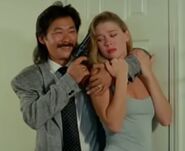 Fujiyama is shot dead by Frank
Community content is available under CC-BY-SA unless otherwise noted.