Spreading bad luck whenever he goes.

Making people miserable.
Trying to destroy Poof.
Trying to be the most popular kid at Spellementary School.

Foop, also known as Anti-Poof, is the secondary antagonist of The Fairly OddParents. He is the Anti-Fairy counterpart of Poof and the son of Anti-Cosmo and Anti-Wanda. Like Poof, he is supposedly the first Anti-Fairy baby born in thousands of years.

He was voiced by Eric Bauza. He was also portrayed by Scott Baio in the live action movie, Fairly Odd Summer.

He was born by Anti-Wanda in the episode "Anti-Poof". He wants to destroy Poof because Foop doesn't want to "share the spotlight" with him (he wants to be the only baby born in thousand of years, not the 2nd). His name is "Poof" spelled backwards which is because they are total opposites. He thinks Poof's name is more masculine than his own.

Timmy then figured out, that since Foop was the opposite of Poof, and bad things happen when Poof cries, that good things happen when Foop cries, Poof proceeded to swipe Foop's bottle, causing him to cry, which reversed all the damage he had done and reverted everyone back to normal.

Like all Anti-Fairies, Foop is all in blue and black colors and has the same common features as other Anti-Fairies, such as the fangs, bat's wings and black crown. Foop resembles Poof, but he is shaped like a cube rather than a ball. He also was born with a black mustache and goatee on his face, the kind typically seen on stereotypical villains or drawn on pictures as vandalism - he also has purple eyes and eyelashes. His pajamas are slightly darker blue than his skin, and they have a skull symbol on them. His wand is a baby bottle with bat wings on the side, as opposed to Poof's rattle. He also speaks with a stereotypical British gentleman accent like his father.

Being the opposite of Poof, Foop is much more cruel, malicious, diabolical, manipulative and most of all evil. He despises the fact he's the second fairy baby in existence and tried all he could to destroy Poof. After he was born managed to destroy three worlds - Anti-Fairy World, Fairy World and Burger World, which shows that he doesn't care about others even his other fellow Anti-Fairies. He doesn't even care about his parents as he openly insults them both and says he prefers being alone. But he does love his mother, Anti-Wanda as he appreciated for pointing out the Big Anti-Fairy Wand and giving him anti-venom potion to his favorite chicken nuggets for lunch.

The more series went on, the more silly he became. When he learned that Poof was about to disappear due to Timmy's wishes were about to be erased he was thrilled but didn't realize that since he's Poof counterpart and if Poof disappears he will disappear as well. In the end he even befriended Poof - but he still desired to destroy him.

When met with Chole he despised her for her kind heart and tried all his best to turn her into evil person. But when she hugged him for the first time he had a change of heart and even stood up to Vicky when she threatened Chole. 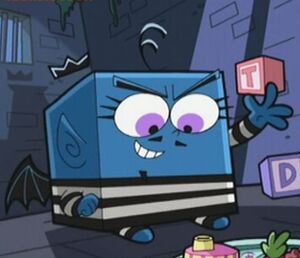 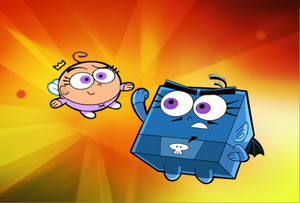 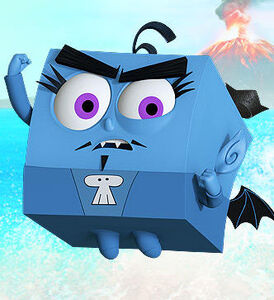 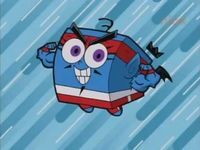 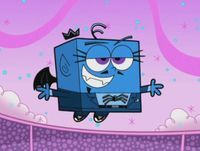 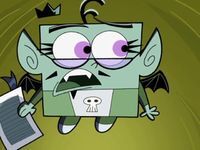 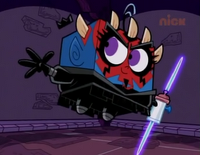